Recently, a 17-year-old student from Norwell High School was killed in a one-vehicle accident in Marshfield, Massachusetts in the early morning hours when the vehicle in which he and two other teens were in crossed over a double yellow line on Forest Street and crashed into a tree. All three of the occupants were trapped in the vehicle and had to be extricated by police and first responders. 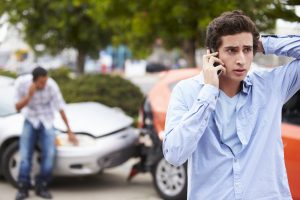 The vehicle was being driven by a 16-year-old who suffered serious injuries along with another 16-year-old passenger.   No further details were given about the accident or why their vehicle suddenly crossed the roadway and into a tree. Speed, distracted driving, fatigue, or drug and alcohol use are the usual factors in such accidents.

Car accidents are the leading cause of death for teenagers in the U.S. Per miles driven, teens aged 16-19 are three times more likely to be in a fatal car accident than drivers aged 20 and older, according to the Centers for Disease Control (CDC).

Adding to the risk is the presence of teen passengers in the vehicle with an unsupervised teen driver. For 16-year-old drivers, the risk is 1.5 times as high for them as for drivers aged 18-19 years.

There are numerous reasons for why teen drivers are at such a high risk for car accidents. These are:

Most high schools have programs directed at teens to address the dangers of risky behavior while driving. All high school students should be required to take a class or to participate in safety programs that urge teens to refrain from dangerous conduct that can kill them, their passengers, or others on the roadways.

GDL or graduated driving licensing systems, are in every state. These limit teen drivers by requiring longer practice periods, limiting driving during certain hours or while unsupervised, and requiring greater participation by parents. As a parent, you can set an example for your teen by buckling up, turning off your cell phone, and explaining how risky behavior can lead to tragic results. Show newspaper or internet photos and reports of teens killed from speeding, drinking, texting, or other dangerous behavior.

Our state can help with the incidence of poor seat belt usage by making seat belt violations a primary offense. Currently, law enforcement cannot stop and ticket a driver for not wearing a seat belt unless the motorist has committed some other traffic violation.

The passenger who was injured and the family of the deceased teen who was also a passenger in the Marshfield accident can bring a claim against the driver for causing their injuries. All motorists, regardless of age or experience, have the same duty to exercise care while operating a motor vehicle. The surviving teens in the accident will hopefully be forthright in explaining why their vehicle suddenly left the roadway that could pin liability on the driver.

Typically, auto insurance policies are woefully inadequate in cases of severe or fatal injuries. Unless an experienced car accident lawyer can find other responsible parties, the injured victim and the decedent’s family will not be sufficiently compensated.

For example, if this section of roadway had been the scene of numerous prior accidents where vehicles had crossed the double yellow line, then a car accident lawyer could argue that a median should have been considered and installed to prevent such occurrences. Or the vehicle might have experienced steering or braking issues. If so, the vehicle manufacturer or whoever negligently serviced the vehicle might be liable. Defects in highway design are often explored in such cases to see if a dangerous curve, lack of signage warning of a dangerous curve, or some other failure by a municipality to properly maintain the roadway and account for dangerous situations could result in liability on the city, county, state, or other entities.

Damages in car accident injury claims vary widely. The categories of damages may include:

Also, the spouse of an injured party can bring a separate claim for loss of consortium.

Only an experienced car accident lawyer can get you the compensation your case deserves. Handling a claim yourself can seriously jeopardize your chances of obtaining a satisfactory resolution of your claim. Call the law firm of Burns and Jain at (617) 227-7423 for a free, in-depth consultation about your injury claim.