A three-vehicle crash in Brockton, Massachusetts last month resulted in a fatality and with one other person sustaining serious, life-threatening injuries. Several other people involved were transported to area hospitals. 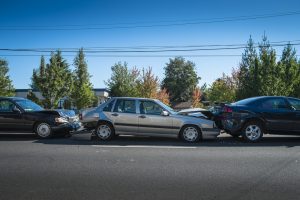 The crash occurred in the early morning hours on Route 24, just south of Exit 33, in Brockton. One of the vehicles ended up pinned against a tree, trapping two people inside. Investigators had not yet determined the cause of the crash, though excessive speed by at least one vehicle cannot be ruled out.

Often in accidents where multiple vehicles are involved, there are different versions of how the accident occurred that are offered by the participants. Police investigators will interview the motorists and passengers as well as examine the aftermath of the accident, the location of the vehicles where they came to rest, and the damage to the vehicles that can offer clues on what transpired. Some vehicles may have had dash cameras that recorded the crash and the moments leading up to it.

Unbiased witnesses may be difficult to locate unless they stopped at the accident scene to report the crash or to assist the injured. Their observations can be instrumental in sorting out conflicting versions. Investigators will see if the evidence at the scene is consistent with one or more versions of what occurred.

An experienced Massachusetts car accident lawyer can also retain an expert in accident reconstruction. These experts usually have experience, education, and training in human factors, engineering, and physics. Since the remnants of the scene will have long been cleared away by the time these experts are retained, they will have to rely on the police investigation results, statements of witnesses, possible skid marks, and any other evidence in making their determination combined with their expertise in their various disciplines.

Multiple Defendants and Percentage of Liability

If there are similar versions of the accident that are consistent with other evidence, then there may be more than one motorist who was at fault including that of any injured party including the decedent in this case.

Massachusetts is a comparative negligence state whereby a claimant cannot be more than 50% at fault in order to collect compensation from another negligent party. If the claimant is found to be less than 51% at fault, then any damages awarded are reduced by their degree of fault. For instance, if an injured party or the decedent was found to be 45% negligent, an award of $100,000 will be reduced to $55,000. But should a claimant be found to be at least 51% at fault, then that person recovers nothing.

Should multiple parties be found at fault, they will be held liable for their degree of fault and have to pay that share to the claimant or claimants. However, insurance policies limit the compensation to be paid out if there is more than one claimant. For example, a liability policy of $50,000/$100,000 will pay out no more than $50,000 to any one claimant and the remaining $50,000 divided among the other claimants based on the severity of their injuries and damages. If more than one party was at fault, then other policies can be considered.

If the injured party who is able to recover compensation from one or more liable parties finds that the compensation from those parties was inadequate to cover their damages, then they can recover additional compensation from their own insurance policy provided they purchased UIM or underinsured coverage. UIM is optional in Massachusetts unlike uninsured coverage, which is mandatory. If a claimant had $100,000 in UIM coverage and obtained $50,000 from an at-fault insured motorist, that claimant could recover up to $50,000 in additional compensation. However, if their UIM limits were only $50,000, they could not recover additional funds under their UIM coverage.

Damages in a car accident injury claim depend on the nature and extent of the injuries sustained and how the accident has affected the claimant’s life. Typically, damages are:

The family of the decedent can bring a wrongful death claim through the executor of the decedent’s estate. A highly experienced car accident lawyer should always handle such claims in order to be assured that all avenues of compensation are explored, that the responsible parties are held accountable, and that all damages are proved. Damages in wrongful death claims include:

Retain an experienced car accident lawyer from Burns and Jain. Our attorneys have handled countless accident claims and give the same dedication to each claim so that you and your family can realize the compensation that your case deserves. Call us at (617) 227-7423 to schedule a free consultation about your injury or wrongful death claim.