Is there anyone of reasonable intelligence who does not think that wearing a seatbelt protects you from serious injury or death?  Still, Massachusetts drivers and passengers are consistently among the worst in the nation in buckling up despite safety campaigns and driving courses that stress its importance.  Although our state’s motorists have made a significant effort since 2003 to match the national average of just over 90.1%, we are still the 6th worst in the nation at 81.6%. 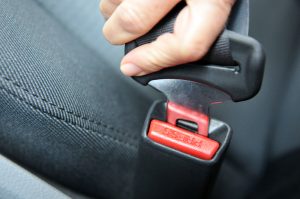 By wearing a seat belt, you reduce the risk of suffering serious and life altering injuries by 45% if a driver or front seat passenger, and of being killed by 50%.  You are also 30 times more likely to be ejected from a car if not restrained.  About 75% of persons ejected are killed though you are also likely to suffer a catastrophic injury if you survive.  All states except New Hampshire, which only mandates it for persons under the age of 18, are required to buckle up.

Since 1975, safety organizations such as the National Highway Traffic Safety Administration have estimated that over 374,000 lives have been saved by seat belts.  However, Massachusetts drivers, like Princess Diana, remain defiant in the face of overwhelming statistics and facts.

Massachusetts males have lower seat belt use than females with usage at 76.81% and 86.95%, respectively.  Commercial drivers and pickup truck drivers are consistently a group that is among the lowest users of seat belts.  Only 57.72% of commercial drivers are estimated to wear a seat belt, a shocking statistic given the heavy regulations imposed on commercial trucking and transport.

Not surprisingly, New Hampshire is the worst in the nation.  It is followed by South Dakota, Wyoming, Nebraska, and Mississippi; all states have wide open roads where you can drive for miles and for long periods without seeing another motorist.  No such excuse exists for Massachusetts motorists.

Why Do We Resist?

One primary factor that many safety advocates point to as a reason for our reluctance to buckle up is that a seat belt violation in Massachusetts remains a secondary offense.  This means that you can choose to not wear a seat belt without fear of being pulled over and cited unless you first commit some other traffic violation such as speeding, making an unsafe or illegal turn, or any other code violation.  State legislators have introduced legislation a number of times to make a seat belt violation a primary offense, but these have quietly died.

Requiring motorists and passengers to wear a seat belt is often interpreted by many as just another attempt by big government to intrude into our privacy rights, just as vaccine and mask mandates are viewed as such intrusions.  Such arguments fail to consider that many aspects of our lives are regulated such as requiring licenses to drive; to own a firearm; to sell real estate; to practice law, medicine or sell real estate; and to perform other skilled tasks.  Furthermore, seatbelts are required on public roads, not private property.  You not only save yourself from serious injury or death, but you risk the lives of others as well if you are unrestrained as well as saving your family from the grief and economic loss that your death can cause.

Further, if you are injured in a car accident that was caused by the negligent driving of another motorists but were found unrestrained, you risk losing substantial compensation that you may recover from the at-fault driver.  Failure to wear a seat belt can mean you were comparatively negligent in causing your own injuries. Defense lawyers can sometimes argue through expert testimony that you would either have not suffered any injuries or your injuries would have been significantly less serious had you worn a seat belt.  If a jury determines that your negligence exceeded 50%, you will recover nothing.  If less than that, your compensation will be decreased by the degree of your comparative fault.  If this is an issue in your car accident claim, retain a car accident lawyer from Boston such as the law firm of Burns and Jain.

Wearing a seat belt costs nothing.  It is similar to buying life insurance or health insurance and complying with the law but at no cost whatsoever.  If you resist, then you risk losing your life or living a greatly diminished one that could easily have been averted with commonsense compliance.

Your Burns and Jain car accident lawyer from Boston will handle every step of your injury or wrongful death claim in a car accident. Damages in an injury claim can include:

If a loved one was killed, the executor of the decedent’s estate can bring a wrongful death claim on behalf of the immediate survivors. Damages can include:

Burns and Jain has a car accident lawyer from Boston who will answer all your questions and concerns about your injury or wrongful death claim, and completely handle your claim from start to finish. If necessary, we will litigate your claim through trial and dedicate ourselves to getting you the compensation you deserve. Call us at (617) 227- 7423 for a free consultation.