Distracted driving presents a consistent menace to anyone on Massachusetts roadway, including pedestrians and bicyclists.  Distracted driving is any activity that takes the driver’s attention away from safely operating a motor vehicle, including texting, grooming, eating, talking, rubbernecking, listening to loud music, or looking for something in the glove compartment or floor. 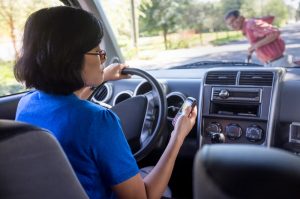 However, use of a cell phone is the main culprit in distracted driving, accident cases.  When your attention is not focused on the roadway, you present a significant hazard to others.  Most estimates are that people spend an average of 5-seconds reading or viewing their text or email messages, sending them, or searching through their data.  At a speed of 60 miles per hour, your car will travel the distance of a football field, more than enough time to fail to perceive and react to a hazard, or to cause your vehicle to drift into an adjoining and occupied lane or into a median.

An accident in Ludlow, Massachusetts a few months ago underscored the hazards of distracted driving. At around 3:25 p.m. on West Avenue, a driver in a 2008 SUV crossed a double yellow line into the opposite lane of traffic and struck a van carrying two correctional officers and an inmate, causing them injuries.  Investigators at the scene determined the driver was on her cell phone at the time of the accident.  She was charged with use of an electronic device while driving, second offense, and other violations.

Officers can make such a determination by checking the person’s cell phone and looking at the time of a call or text message and correlating it to the time of the accident.  In some cases, witnesses from other vehicles may have observed the driver talking or texting in the seconds before the collision.

Since this was the Ludlow driver’s second offense in unlawful use of an electronic device while driving, it begs the question of whether she was insured or adequately insured so as to compensate the injured officers and inmate.  Although someone accused of or convicted of a distracted driving offense does not automatically have their driver’s license suspended as would a motorist charged with driving impaired or intoxicated or with a BAC of at least 0.08%, the motorist can still lose a license based on excessive violations such as a second distracted driving violation.  Such motorists may find it difficult to find insurance coverage or will have to pay a substantial premium to obtain coverage, and usually at minimal levels.  Also, in substantial injury cases or where there are multiple victims and minimal insurance coverage from the at-fault driver, a distracted lawyer needs to search for other avenues of compensation.

If the negligent Ludlow driver was uninsured, the victims can recover under the uninsured (UM) provision in their auto liability policy.  UM coverage is mandatory in Massachusetts. Should the driver have had minimal coverage such as $20,000, the minimum allowed under state law, the victims can seek additional compensation from the underinsured (UIM) provision of their policy, provided they purchased it since it is not mandatory.

For example, if the at-fault driver had $20,000 in liability coverage and the victim had UIM coverage of $100,000, the claimant could recover up to $80,000 in additional compensation. But if both defendant and claimant had matching coverage amounts, such as $50,000 each, then the claimant would be unable to recover more.  Accordingly, it is vital that you do purchase UIM coverage and that it be at least $100,000.

Damages can be substantial in many car accident claims, which a distracted driving lawyer can handle and explore the possibility of other compensation. Damages in injury cases often include:

A driver with a second or more distracted driving offense can present complex or difficult issues regarding adequate compensation for injury victims.  Call us at (617) 227-7423 for a free consultation about your accident injury claim and see how our attorneys can help you get the compensation you deserve.