Bills are pending in the state House and Senate that would allow electric or e-bikes to travel in bike lanes. Currently, Massachusetts is one of just 4 states that classifies electric bikes as mopeds since they are battery powered and bars their presence in bike lanes though opponents of the law acknowledge that the law is generally ignored and not enforced. 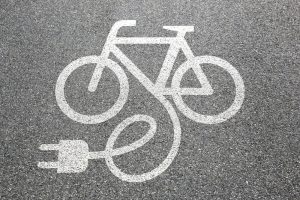 E-bikes allow riders to use their own foot power to pedal or to switch over to the electric battery that can power a bike to 20 miles per hour or more, which is considerably faster than most human-powered bicyclists will travel unless going downhill or racing.  Some lawmakers cited safety issues in allowing motorized bikes into lanes designed for bicycles.  An e-bike traveling at 20 miles per hour can interfere with traditional bike paths.  A collision could result in severe injuries to both riders.

Lawmakers could restrict speeds in bike lanes so as to accommodate e-bike riders, though enforcement is really the key issue.  It would be instructive to see how other states that classify e-bikes as bicycles and permit them to use designated bike lanes are doing and if there are safety issues that should be addressed.  An argument for allowing such bikes access is that they still generally travel slower than motor vehicles even in urban and suburban areas and are at risk if riders must find room on roadways with passenger cars, trucks, and motorcycles who are often less than accommodating.

Massachusetts cities are upgrading roads and re-designing others to accommodate bicycle riders and to protect pedestrians since fatal accidents between cars and bicyclists, as well as those involving pedestrians, have been on the increase across the nation. As a bicyclist or pedestrian, you are at the mercy of automobiles, buses, and trucks who must give you at least 3-feet of space when passing and are not permitted to travel in designated bike lanes unless turning. On some roads, bicyclists are allowed full access to the roadway.

As a bicyclist, you are required to obey the traffic laws.  This means stopping at red lights and stop signs, allowing pedestrians to cross in crosswalks, and to not travel faster than conditions allow. In other words, you do have to exercise ordinary care when riding.  State law also mandates lights on bicycles when riding at night, and adults must wear a helmet.

Many accidents between a car and bicyclist, though, result from the motorist’s negligence in speeding, side-swiping a bike by getting too close, unlawfully traveling in a bike lane, or simply not seeing the rider due to fatigue, distraction, weather, or just inattentiveness.

Factors in most bike accidents that are the result of a motorist’s negligence are:

Around 17% of bike fatalities involve riders under the age of 21, while 40% involved riders who were 55 and over, suggesting that older riders are slower to react to hazards or to perceive them. Males are victims in 85% of all bicycle crashes. Over half of fatal crashes occur between the hours of 4:00 p.m. and 6:00 p.m., when traffic is at its apex and dusk or darkness in the fall and winter months contributes to a motorist’s failure to see or notice a rider.

Liability and Compensation in Bicycle Accidents

Liability is often an issue in bicycle accidents, which requires that you retain an experienced Massachusetts bicycle accident attorney to handle your claim.  A motorist will typically assert that the cyclist failed to stop at a stop sign or red light or came out of nowhere into the path of the car.  In such cases, your bicycle accident attorney may have to retain an investigator or bike accident expert to review the scene of the accident and attempt to find unbiased witnesses. Occasionally, the vehicle will have a dash camera on board that recorded the accident, or surveillance cameras at intersections or adjacent businesses may have captured the accident. Further, your attorney may be able to locate other entities who may have contributed to the accident, including faulty vehicle brakes, or steering on a motor vehicle, defective road design, failure to properly service the bicycle by a bike shop, and others.

If you were injured in an accident with an automobile whether you were on a bicycle or were crossing the street as a pedestrian, you are entitled to PIP or personal injury protection benefits, up to $8,000 for medical and lost wages regardless of fault.  You can bring an injury claim against the at-fault driver once you have met the state’s no-fault threshold, which is either having medical expenses of at least $2,000, or having sustained a broken limb, suffering permanent disfigurement, or other severe injury, or were killed.

Injuries in many bike accidents include:

An individual injured by the negligence of another party has 3-years to file a claim in court in Massachusetts. However, you should retain a bicycle accident attorney as soon as possible to investigate and possibly resolve issues of liability, preserve evidence, and make certain that you are on the proper path to recovery.

Damages are an essential element of any personal injury claim. By retaining a skilled bicycle accident attorney, you give yourself the best opportunity to obtain the most compensation for your injuries. Damages in a bike injury accident claim may include:

Never handle an injury case on your own as you can seriously jeopardize your opportunity to receive the most compensation available and can miss holding certain entities responsible for your injuries and losses. By retaining a bicycle accident attorney from Burns and Jain, you can be assured of quality representation.