A recent accident in Lynn, Massachusetts involving a tractor trailer caused considerable property damage, damaging four motor vehicles and a house that the truck crashed into. The driver, who hailed from Rhode Island, was hauling frozen food on Western Avenue at around 4:30 a.m. when he allegedly swerved to avoid a raccoon in the roadway and lost control of his truck.  The crash dragged one of the struck vehicles into the residence that took out the front porch and the beams supporting a second-floor porch. 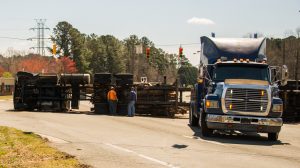 Fortunately, no one was in the cars that were struck and none of the house occupants suffered any injuries.  Clean-up crews were called in as hazardous materials were leaking from the truck.

It is obvious that the truck driver is at fault, notwithstanding his excuse that he lost control only because of the raccoon.  However, as a fire department official stated at the scene, the crash could easily have killed multiple people if anyone had been in the struck vehicles or been on the porches at the time of the collision.  Under any circumstances, the driver should have just struck the raccoon rather than lose control that might have resulted in loss of life.

It also seems inexplicable that the driver could have lost control to such a degree unless he had been traveling too fast for the conditions or had fallen asleep.  Blaming an object or animal in the roadway for negligent conduct has no merit since anyone exercising ordinary care would have either run over the object or animal if the only other choice on a crowded and narrow street was to swerve to avoid the hazard and run into multiple parked vehicles and a home.

Truck drivers are trained on how to operate their vehicles including how to avoid crashes, performing pre-trip inspections, driving for limited periods of time. keeping logs,  and to only travel at certain speeds.  Drivers are also given drug and alcohol tests. Commercial drivers are only allowed to drive with a blood alcohol concentration level (BAC) that is less than 0.04%, while other motorists may drive legally so long as their BAC is under 0.08%. Any accident involving a truck engaged in interstate commerce or where a commercial license is required is subject to these regulations. For such cases, accident victims and their families should only retain a car accident attorney who has successfully handled and prosecuted injury claims involving trucks and commercial carriers.

Commercial carriers carry liability insurance that is typically around $5 million. This may be insufficient to compensate multiple severely injured victims or the families of those who suffered fatal injuries. For the Lynn case, the company will have to pay for the extensive property damage to the vehicles and home, which one observer stated was rendered uninhabitable.

Damages in any car accident injury claim depend on the nature and extent of the victim’s injuries and how the accident has affected their daily life. You can claim the following damages in an injury claim:

Punitive damages are only available in Massachusetts in wrongful death claims and are only awarded or considered if the defendant’s conduct was grossly negligent or exhibited a willful indifference to life and safety. For example, the conduct of a driver who causes a roadway death by traveling at a greatly excessive speed, or who has an elevated BAC may have to pay punitive damages. If a company that employed the driver had hired an obviously incompetent person to operate their trucks, failed to administer drug or alcohol tests despite the driver having a history of impaired driving, or who falsified its logs so that a driver could drive beyond regulated hours, may also find itself subject to exemplary or punitive damages.

These facts are often only revealed after an extensive investigation by an experienced car accident attorney or if the Federal Motor Carrier Safety Administration conducts an investigation.

Never handle an injury case on your own as you can seriously jeopardize your opportunity to receive the most compensation available and can miss holding certain entities responsible for your injuries and losses. At Burns and Jain, we have a car accident attorney who is highly experienced and can handle complex injury claims, especially those involving trucks or commercial carriers.