Massachusetts Attorney General Maura Healey has joined with 16 other attorneys general and the District of Columbia to demand that the National Highway Traffic Safety Administration (NHTSA) draft certain safety standards for child car safety seats. In a letter sent to Secretary of Transportation Pete Buttigieg, and Steve Cliff of the NHTSA, the group urged the government to take “swift action” in addressing shortfalls in safety seat regulations. 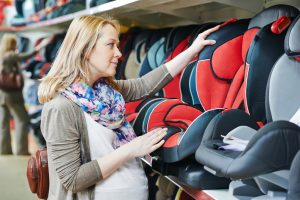 The AGs are responding to CBS and ProPublica reports that revealed laxity by car seat manufacturers who gave passing grades to their booster seats in side-impact crashes despite video footage showing dummies being violently thrown around.

A consequence of the reports was an investigation by the House Oversight Committee that showed that booster seat manufacturers were seriously misleading consumers regarding the safety of their booster seats, and who were recommending that children move into booster seats when their weight hits 40 pounds or even as light as 30-pounds. Car safety experts told CBS news investigators that children are not well-protected in booster seats during a crash if they weigh less than 40-pounds. The AGs have adopted the experts’ recommendations that children do not transition to booster seats until they are over 40-pounds. Until then, they are safer in a front-facing seat with a five-point harness.

Since 1987 Canada has required that children under 40-pounds remain in front-seat facing safety seats. The American Academy of Pediatrics has also made this recommendation since 2002, but no government action has taken place to implement that recommendation into a regulation or rule.

The AGs also pointed out that there are no standards for side-impact crash tests for car seats, which the NHTSA has promised to promulgate by January 2022. Along with Massachusetts, the attorneys general who signed the letter to Secretary Buttigieg and Mr. Clinton of the NHTSA include those from the states of California, Connecticut, Delaware, Illinois, Iowa, Maine, Minnesota, Nevada, New Jersey, New Mexico, New York, Oregon, Pennsylvania, Washington, Wisconsin, and the District of Columbia.

The NHTSA also announced that its new rules would reduce early transitions to forward-facing car seats and boosters and would improve policies on correct installation of car seats. Inadequate installation of a car seat and failure to ensure the child is safely restrained can lead to serious injuries for children that could have been prevented. Injuries include back and spinal injuries that can be permanent.

When installing a child car safety seat, it is important to read the manual but also to be aware of certain common errors while doing so that could endanger your child.

If you feel uncomfortable or unsure about having your child properly restrained in a safety or booster seat, you can ask a police officer or fire station personnel to check if it is installed correctly or to have them install it for you.

At the Law Office of Burns and Jain, we represent families with children injured in car accidents. In many of these accidents, a child is injured because the safety seat failed to restrain the child. An experienced motor vehicle accident attorney from our office will investigate all aspects of a car accident injury, including the actions of other drivers, the traffic conditions, road conditions, weather, and equipment such as tires, steering and braking. If your child was injured in a car seat, we will have experts examine the seat to determine if the seat was properly installed or whether a defect in manufacturing or design contributed to the seat’s failure to prevent injury.

Damages in a car accident claim can be substantial. Damages typically include:

If your child suffered permanent injuries, our forensic experts can report and testify on damages based on lost earnings or lost earning capacity by examining numerous factors in which to calculate reasonable and foreseeable economic loss. Other experts can testify on how the injuries can affect the child’s future and well-being.

Injuries to a child can be emotionally devastating for the parents. If the injuries were in a car accident, a motor vehicle accident attorney from our firm will thoroughly investigate the accident and determine what parties contributed to the accident and your child’s injuries.

Trust your claim to motor vehicle accident attorneys who have represented the interests of car accident victims locally and throughout the Commonwealth of Massachusetts for decades. Call us at (617) 227-7423 for an in-depth discussion of your injury accident claim.