Recently, a 46-year-old Hampden County man from Wales, Massachusetts riding on a 2018 Harley Davidson motorcycle with a passenger was killed when an SUV turned left in front of him. His passenger, a 52-year old woman from Charlton in Worcester County, was airlifted to UMass Medical Center in Worcester where she was reported in serious condition. 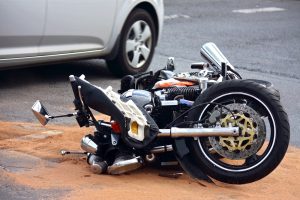 Motorcycles are at a distinct disadvantage on the roadways. They are smaller than ordinary passenger vehicles, SUVs and trucks, and motorists often fail to even notice them or misjudge their speed when they are approaching them in an oncoming lane. You can also be assured that many times when a motorcyclist is involved in accident with another motor vehicle, that the rider and his/her passenger will sustain serious if not fatal injuries. In fact, you are 30 times more likely to be in a fatal accident if on a motorcycle than in a passenger vehicle. Further, you have a 45% chance of sustaining a serious injury in any type of motorcycle accident.

Around 75% of motorcycle accidents involve another motor vehicle. Only about 25% are single vehicle accidents that can occur due to a rider striking an object in the road, sliding on a slippery surface, or from loss of control due to excessive speed, impairment, or other factors. Only 3% of accidents involve equipment failure.

Factors in most motorcycle accidents include:

Although the rider in the above Belchertown accident was middle-aged, the overwhelming majority of riders injured or killed on motorcycles are between 16 and 24 – and are male.

Another interesting statistic is that those riders who had been cited for recent traffic violations or been in a previous accident are more likely to be injured or killed, even if the accident was not their fault. Also, about 50% of motorcycle accidents involve riders with less than 5-months of riding experience.

Since most accidents involving motorcyclists and motor vehicles drivers are the fault of the latter, we can assume that experienced riders are more likely to avoid collisions, can properly control their bikes, and do not engage in risky behavior. The more experienced you are, the more likely you will ride defensively such as when approaching an intersection or riding in suburban areas and assuming that other vehicles will not see you.

Also, by taking a course on rider safety and operation, you will significantly reduce the chances you will be in an accident.

The days when the public and police associated motorcycle riding with outlaw gangs and reckless youth are in the past. As indicated above, most accidents are the fault of motorists who inform police that they never saw the motorcyclist or that s/he suddenly appeared out of nowhere. Where a slight bump of another vehicle while making an unsafe lane change might only result in minor damage to a vehicle, the same misjudgment by the driver could easily cause a motorcyclist to lose control or be ejected from his/her bike.

Also, sudden braking or taking a hard swerve to avoid an accident while on a bike can result in loss of control and skidding, causing the rider and passenger to fall onto the unforgiving roadway surface, resulting in severe skin burns, broken bones, head and internal organ injuries. Still, liability is often contested in numerous accidents even if fault seems obvious. It is vital that you retain a motor vehicle accident attorney who has years of experience in handling motorcycle accidents.

Since your bike is not a passenger vehicle, you are not entitled to Personal Injury Protection benefits, or PIP, which is available to any motor vehicle driver, passenger or pedestrian injured in any accident regardless of fault. PIP benefits provide up to $8,000 in medical expenses and lost earnings. Consequently, injured motorcycle riders may face challenges in paying for medical treatment and recovering lost wages, especially if they are found at fault.

However, an injured rider or passenger can still bring a negligence action against an at-fault motorist. And, if the motorist was not insured, the rider or passenger can still recover under the uninsured (UM) provision of their own liability policy. Since the risk of serious injury or death is so much higher for motorcycle riders, it is essential that you purchase adequate coverage. In most instances, you should have at least $100,000 in liability, UM and underinsured (UIM) coverage.

Although UM coverage is mandatory in Massachusetts, UIM coverage is only optional. UIM applies whenever you are able to recover the policy limits of the at-fault driver’s insurance and your injuries and damages exceed that amount. In such cases, you can collect additional compensation over and above that party’s policy limits. For example, if the responsible motorist had $50,000 in coverage that you recover, and you have UIM limits of $100,000, then you can recover up to $50,000 in additional compensation from your own carrier.

Injuries and Damages in Motorcycle Accidents

In nearly half of all motorcycle accidents, the rider and passenger sustain serious injuries such as:

Damages can be extensive so while it is essential that you have sufficient insurance, you should also retain an experienced motor vehicle attorney who can handle liability issues as well as provide all required documentation to prove your damages before negotiating a satisfactory resolution of your claim or bring your case to trial.

Having a motor vehicle accident attorney from Burns and Jain on your side is vital to getting the compensation your claim deserves. We have decades of experience in fighting insurance companies on behalf of our injured clients and have obtained millions of dollars in compensation. Call us at (617) 227-7423 for an in-depth analysis of your injury accident claim.