Prompted by the George Floyd tragedy in Minneapolis and numerous other fatal encounters by largely Black motorists with police during traffic stops, the Northampton, Massachusetts Policing Review Commission recently came out in favor of unarmed traffic enforcement. This would entail a non-police response to minor traffic law violations such as speeding, unlawful turns, expired plates, or equipment violations. In other words, utilizing a trained civilian corps for traffic matters that do not involve threats to public safety.  Perhaps this is good for public moral, but how will this affect victims of personal injury? 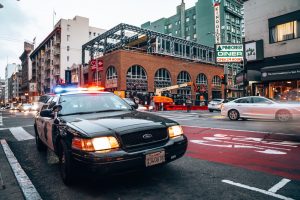 A recent incident in Brooklyn Park, Minnesota, a suburb of Minneapolis, highlighted what has come to happen all too often when police officers stop and detain a Black motorist for a minor traffic infraction. In that case, Daunte Wright was stopped by police for an expired tag. When police found that he had an outstanding warrant and moved to arrest him, Mr. Wright panicked and tried to get back into his car. Unfortunately, an officer mistakenly took out her revolver instead of a taser and shot Mr. Wright to death.

Numerous other incidents involving seemingly innocuous traffic stops have escalated to the point where municipalities are reconsidering the use of police for detaining people over routine traffic violations. People of color are understandably nervous and anxious when pulled over for police because of the potential for a misunderstanding or due to demonstrated police bias among many officers who consider any person of color they pull over to represent a threat. Studies also consistently show that people of color are pulled over far more than Caucasians and are subject to more intrusive activity such as questioning, searching of the vehicle, arresting, and applying force. In still another Minnesota incident, Philando Castile was shot and killed by police after being stopped even after he informed police, he had a licensed handgun in his glove compartment and at the request of the officer was moving to retrieve his driver’s license when the officer panicked and fired his revolver.

Use of Traffic Monitors

One commentator has suggested traffic agencies where trained public officials in lieu of police are used to conduct in-person traffic stops. These individuals would not have the authority to search, question, run background checks, detain, or arrest anyone. If someone is suspected of driving while impaired or driving a stolen vehicle or some other indicia of criminal conduct, then police can be summoned. By knowing that these traffic officials lack normal police power or authority and are unarmed, motorists would not be so anxious or fear that undue force would be used when encountering them. These officials would also be trained in de-escalation techniques and violence prevention if motorists become belligerent.

In case of a traffic accident, non-police officials could also be used instead of police. Investigating an accident is largely an investigatory activity that rarely requires police intervention and could be handled by civilian staff just as readily if not more expertly…if they were trained in accident reconstruction, witness interviewing, and the basics of physics and engineering of vehicle collisions.

These individuals could be specially trained in accident investigation and have the authority to cordon off traffic in a serious or fatal accident, or to summon police assistance if needed to control traffic.

It is possible that these trained accident officials could be certified and/or have a particular background in physics, human factors engineering, or other applicable disciplines, and used as expert witnesses in auto accident injury claims. Similar to the use of traffic monitors, this would free up police resources to concentrate on more serious crimes or threats to public safety and even increase response time for matters that require police intervention.

A personal injury attorney representing car accident victims should be ready to work with this advance in traffic accident investigation since experts exclusively designated for such tasks would have the expertise and knowledge that is lacking in many police officers investigating an accident. Having these experts on the scene moments after an accident can be instrumental in preserving evidence and in making reasoned, professional, and competent determinations on how an accident unfolded.

Of course, funding for traffic monitors and accident officials would have to either be diverted from the police budget, from another department, or be funded in some other fashion if municipalities recognize that changes in how we enforce traffic laws and investigate injury and fatal accidents are vital to bringing calm and sanity to public interaction with police, and a higher level of professionalism in accident investigation.

One of the elements in any personal injury claim is that of damages. An experienced personal injury attorney is essential in obtaining all necessary documentation of your damages including medical costs, medical reports, wage loss documents, and others so as to get you the most compensation for your claim.

Damages in a typical car accident claim are:

In wrongful death cases, punitive damages are available if the defendant’s conduct was wanton, malicious, or willful.

The attorneys at Burns and Jain have been representing the rights of injured persons in car accidents, slip and falls, motorcycle, pedestrian, truck, and other types of injuries for decades. Call us at (617) 362-3202 for a thorough analysis of your car accident injury or death claim.