Earlier this year, a 4-year-old Mashpee boy, and a member of the Mashpee Wampanoag tribe, was killed in an accident with a flat-bed truck on Route 151, according to Falmouth, Massachusetts police. The boy was a passenger in a sedan driven by a 28-year-old woman who suffered minor injuries. The boy was airlifted to a Boston hospital where he succumbed to his injuries. There were no reports on how the accident happened; only that it remained under investigation. 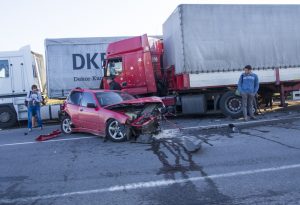 Fatal injuries to children are catastrophic for the families regardless of how they occur. Serious injuries to anyone are also tragic, but when they involve children the consequences are often for the rest of their lives, affecting their economic and social lives. The emotional and mental consequences for them and their families are often just as devastating.

Nearly everyday we read about children who suffer abuse and injury at the hands of parents, guardians, babysitters, teachers, coaches, and others with authority over them. Most injuries and fatalities suffered by children, however, are by unintentional means. This includes injuries from burns, falls, drowning, suffocation , poisoning, and traffic accidents. Approximately 12,000 children suffer fatal injuries in accidents each year, and more than 9 million are treated in emergency rooms for non-fatal injuries from various causes.

According to the Centers for Disease Control (CDC), the leading causes of death among children are:

Most infants or children up to the time they can drive or obtain a learner’s permit are in child safety seats or restrained by seat belts and supervised by their parents or guardians. It is when they begin to drive and to carry passengers who are close to their age that fatalities increase. In any case, motor vehicle accidents are the major cause of deaths among those 0-19 years of age.

In the death of the Mashpee child, the family could bring a wrongful death claim against the truck driver and owner/employer since a commercial vehicle was involved and the driver was likely engaged in a work-related activity. So long as the truck driver negligently caused the accident, the claim could result in significant compensation as commercial policies are often several million dollars.

Many truck accidents are the fault of the truck driver and trucking company. Drivers often operate their vehicles in violation of mandated working hours, and experience fatigue or take amphetamines to stay awake that impairs judgement. Defective tires, faulty steering systems, improperly secured loads, speeding, alcohol and drugs, and poorly trained drivers are other causes of trucking accidents.

Childcare centers and pre-schools are other areas where young children suffer serious injuries or deaths due to the negligent or wrongful conduct of those we trust to care for our children. Nearly two-thirds of children are in child care and 30% in full-time facilities while their parents are at work. Many children are cared for by other family members or neighbors. Unfortunately, reporting requirements for childcare centers are not as strict as for nursing homes or schools with only 38 states mandating that licensed centers report injuries and fatalities. If your child was injured or suffered a fatal injury at pre-school or a licensed childcare facility, immediately contact an attorney.

Serious injury and fatal accident claims should be handled by an experienced personal injury attorney who has not only successfully handled such cases before but who can empathize with the distraught or grieving family. The attorneys at the law office of Burns and Jain are parents and grandparents and have been representing families whose children were injured by the negligence of other individuals and entities for over 35-years.

Like any other accident such as a car accident, your car accident attorney has the burden of proving certain elements that comprise the tort of negligence:

In an injury case, a parent or parents are appointed as the child’s guardian for purposes of the lawsuit. All the above elements must be proved before compensation can be awarded or negotiated if there is no trial or binding arbitration. Any compensation awarded or obtained in a settlement may go to pay for outstanding medical expenses but most of the funds are deposited in a trust account for the child until he/she reaches adulthood.

Damages in child accidents and deaths are similar to those suffered by adults. If a child suffered a permanent injury such as paralysis, disfigurement, loss of sight or hearing, or the loss of a limb, the physical and psychological toll can be devastating. The child must deal with a lifelong disability that will affect their choice of profession or trade, their earning capacity, and be a major factor in their social lives and overall well-being. For some, they will have to endure decades of pain and suffering, undergo multiple surgeries, and learn to adapt to a life with a disability.

Damages for child injuries include:

A forensic economist is usually retained by a car accident attorney to evaluate the child’s future earning capacity based on their disability or who would have earned a certain amount of income during their lifetime if they had survived in a wrongful death claim. Factors such as a reasonable prediction of the child’s career prospects, and life expectancy of the child and beneficiaries are considered.

A psychologist can testify as to the emotional toll or burden the child will have to bear. Other specialists can testify or provide reports on the child’s physical restrictions, on what he/she will be able to do or what devices will be needed for driving or performing other activities in the home or at the office or other work site.

Damages in these cases require your car accident attorney to thoroughly investigate the family circumstances, and to engage the services of experienced experts who can show the substantial losses from the death of a child.

By retaining a car accident attorney from the law firm of Burns and Jain, you can be assured that your claim will be vigorously pursued and that all avenues of compensation examined. Call us at (617) 286-3594 for a free, in-depth discussion of your child’s car accident, other personal injury, or wrongful death claim.