Lexington Center is the hub of the town of Lexington, Massachusetts and is positioned around Massachusetts Avenue. It is well-known as the site of the Battle of Lexington, the first battle of the American Revolution, with a visitor center that attracts over 100,000 visitors each year. 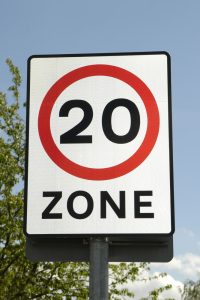 Lexington Center boasts numerous retail shops, fine restaurants, a library, city buildings, parks, a museum, and historical landmarks. Besides having substantial pedestrian traffic, the Minuteman Commuter Bikeway runs parallel to Massachusetts Avenue that has some 400,000 riders using the trail each year. But combine heavy pedestrian and bicycle traffic with a daily influx of 14,000 motorists in a relatively confined area and you are bound to have accidents.

In early July, the Select Board of the city passed an ordinance establishing a 20-mile per hour safety zone that includes Harrington Road near First Parish in the west to Slocum Road and Woburn Street in the east. The newly established zone also runs through portions of the streets of Bedford, Hancock, Merriam, Waltham, and Woburn. The total safety zone area is about 0.7 miles and includes a nine public streets and 16 crosswalks. Signs warning motorists to slow down before entering the safety zone will be posted.

The previous posted speed for this particular area ranged from 25 mph to 30 mph. Higher speed zones usually translate into increased rates of traffic accidents and fatalities, even with a slight increase in speed. The National Center for Biotechnology Information (NCBI) published results of a study 20-years ago on the effects of a reduced speed limit on urban traffic accidents and fatalities. It found that the chances of a pedestrian being struck and killed by a car is 45% if the car is traveling 30-mph, but is decreased to 5% if the vehicle was traveling 20-miles per hour. Research done on city streets in London, England showed that 20-mph zones lowered the overall risk of traffic accidents by 60%.

The study’s authors cautioned that reducing speeds, while a major factor in accident reduction, should not be the sole panacea since many accidents are due to distracted and fatigued motorists, those who are driving under the influence, or who simply have poor driving skills. Traffic calming measures and efforts to improve driver skills were recommended by the researchers as being equally effective in reducing accident rates.

The board’s decision to impose the reduced speed limit in the safety zone has been a long time coming. Accident clusters in the new safety zone have been a matter of concern to residents and traffic safety officials for a number of years. The speed ordinance was enacted after a Transportation Safety Group studied the problem and recommended that the speed limit in this area be reduced.

Accident clusters are areas where the number or percentage of accidents occur are higher than normal or which are expected. For instance, there were accident clusters in the following areas:

Lexington Center’s decision to introduce a safety zone and reduce city speed limits follows other major metropolitan areas that previously decreased speed limits. New York City is testing “Neighborhood Slow Zones” that has dropped speeds to 20-mph on interior roads in residential areas. Philadelphia is also joining in inaugurating a two, slow speed corridors. Portland, Oregon recently installed 2,000 signs that have brought speed limits on streets throughout the city down to 20-mph. Boston lowered many of its area speed limits to 25-mph and is seriously considering lowering them even further to 20-mph.

Obviously, reducing speed limits gives pedestrians and bicyclists a greater chance of being seen before a possible collision, and to survive should an accident occur. We shall be following Lexington Center’s progress in reducing traffic accidents over the next few years.

Car accident claims are prevalent, whether in a traffic cluster area or not. Damages can be extensive, especially where pedestrians and bicyclists are concerned. To get the maximum compensation for your injury claim, retain an experienced car accident lawyer from the Burns and Jain Law Office.

Damages in a car accident injury claim may include:

Handling your own accident claim does not ensure that you will receive the most compensation for your injury. Studies show that retaining a car accident lawyer substantially increases the compensation that injury victims receive, even accounting for legal fees.

Retain the Car Accident Lawyers from Burns and Jain

Burns & Jain represented a victim on a crosswalk accident in Lexington Center.  The driver swerved around a vehicle that had stopped at the crosswalk and smashed into our client who was in the crosswalk.  The injuries were serious and permanent.  The driver hired a criminal defense lawyer and his insurance defense lawyer asserted that it was not his fault.  In our aggressive pursuit of justice for our client, we attended all of the criminal hearings, filed suit and got the case resolved with both insurance and private funds.

With a highly experienced car accident lawyer, you can be assured that your claim will be handled with the utmost competence, that all potential parties and avenues of compensation will be examined, and that your rights and legal options are protected. Call our office at (617) 227-7423 for a free consultation about your injury claim.