A hit-and-run accident in Lynn, Massachusetts earlier this summer left a man in serious condition while police struggled to find the perpetrator. The accident occurred on Lynnfield Street near Cumberland Circle where a vehicle struck a 55-year old male pedestrian. Witnesses told firefighters and police that they saw a dark vehicle fleeing the scene. 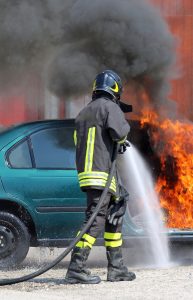 Surveillance footage released by police only showed a vehicle suddenly slowing at the accident scene shortly after it occurred. Without more, police may find it difficult to identify the vehicle and locate the motorist.

In some hit-and-run accidents, police can use forensic evidence at the scene such as vehicle parts to at least identify the make and/or model of a car. Eyewitnesses may have seen some letters or numbers on a license plate or that a male or female was driving. Surveillance footage may also offer clues. In this case, the involved car likely had minimal property damage since it struck a pedestrian. Unless the motorist comes forward or otherwise reveals to someone else that he/she had struck a pedestrian but fled the scene, police may never identify the driver.

Proving Liability in a Hit-and-Run Accident

In hit-and-run claims, the victim still has the burden of proof in demonstrating liability as well as proving damages if the victim wants to be compensated. This is true whether the liable party is found and is insured, or is found and did not possess auto liability insurance, or is never identified.

For example, if a motorist claims that a vehicle struck it and then fled the scene, the motorist still must show that the fleeing driver caused the accident by some unlawful or negligent conduct. This could include failing to stop while the victim’s car was lawfully stopped for a stop sign or traffic light, making an unlawful turn, speeding through a red traffic signal, or some other traffic violation.

If you were forced off the roadway but not struck by the fleeing vehicle, you may need third-party verification that another motorist’s reckless driving forced you off the road and caused you to crash into a median, down an embankment, into another vehicle, or some other occurrence that led to your injuries. If your car was struck, then the property damage might support your allegation that you were struck by another car. Rear-end damage is indicative of a rear-end collision. In the overwhelming number of rear-end accidents, the trailing motorist is at fault. In any event, always file a police report as your insurance company will require a report or it may decline your claim.

In the Lynn accident, a pedestrian was struck and witnesses saw a vehicle fleeing the scene so there is no doubt about the accident. However, the news reports did not indicate whether the pedestrian was struck in a crosswalk. If not, and he was walking in the roadway on a poorly illuminated street at night, had attempted to cross the road outside a crosswalk in the middle of the street between parked cars, or had darted in front of the car that struck him, then liability might not be so clear.

Although the driver, if found, could be prosecuted for leaving the scene of an injury accident, he or she may not be civilly liable if the evidence shows that the pedestrian was careless in crossing the street or in exposing himself to danger. For instance, a hospital report could reveal that the pedestrian had a high percentage of alcohol in his system or a narcotic drug such as cocaine or methamphetamine. Although such a revelation would not necessarily conclude that the victim caused the accident though his own negligence, an insurer or a jury could conceivably find him comparatively negligent. In Massachusetts, your own degree of negligence or culpable conduct cannot be 50% or more or you are barred from claiming any compensation from another negligent party. None of the news reports indicated any negligence by the pedestrian in this case. Also, fleeing the scene of the accident can certainly be construed by a jury as an admission of guilt.

Compensation for Victims of a Hit-and-Run Accident

Anyone involved in a motor vehicle accident in Massachusetts is entitled to PIP benefits, regardless of fault, since we live in a no-fault state. Injured pedestrians can look to the policy of the liable motorist for such benefits, or their own in a hit-and-run or otherwise uninsured case. PIP benefits include:

If you have a private, non-ERISA  health plan, your PIP insurer might still have to pay at least some of  the additional $6,000 in benefits if:

PIP will pay 75% of your lost income, but this is not in addition to the $8,000 in benefits that includes medical expenses. Payments for lost earnings are based on the salary you had in the year before the date of the accident. Most plans have deductibles, so you would likely have to pay the $500 or $1,000 before having the remaining sum to draw on. If your medical expenses were $2000, and your deductible was $500, you would have $5500 to draw on for your lost income.

If your medical expenses exceed $2,000, or you have a serious, permanent injury, disfigurement or a broken limb, or fatal injury, then you can pursue a third- party claim for additional compensation that includes pain and suffering as well as for any uncompensated  lost income and medical expenses.

If the fleeing motorist in the Lynn accident cannot be found, and the victim is able to show that the motorist who struck him was negligent, then he can bring a claim for compensation under the uninsured (UM) provision of his own auto liability policy, if he or someone in his household possessed one. If he did not have a policy but lived in a household where another member did, then he could utilize that policy. In Massachusetts, all auto policies include UM coverage in the same amount as the policy limits. If your policy limits are $50,000/$100,000, then your UM coverage is $50,000.

As noted above, the uninsured motorist must still be found at-fault for the accident whether found or not. In an UM claim, the victim’s own insurer, or whichever insurer is providing the applicable UM coverage, becomes the adversary, and the claim proceeds as any other injury claim. The only difference is that a final resolution of the claim is by binding arbitration instead of a jury or court trial.

Damages in an Uninsured Motorist Claim

Damages in any injury claim depend on the nature and extent of your damages. You are also limited to the UM policy limits unless there are other defendants involved. Damages may include:

Punitive damages in car accident and any other injury claims are only applicable in wrongful death cases.

Uninsured motorist claims Car can often present challenging and complex issues that only an experienced and resourceful car accident lawyer should handle. Call a car accident lawyer from Burns and Jain at (617) 227-7423 for a free consultation about your injury claim.