A four-vehicle crash in Concord, Massachusetts this summer resulted in fatal injuries to an 87-year old Concord woman. The accident occurred around 2:50 in the afternoon on Route 2 near Sudbury Road. All four vehicles were in the eastbound lane of Route 2 when traffic began to slow. A 2014 Jeep Cherokee driven by an Arlington man apparently failed to notice the slowing traffic and slammed into the rear of a Honda Civic driven by the 87-year old victim. Her car was propelled into a 2020 Toyota Corolla that in turn rear-ended a 2014 Ford Taurus. 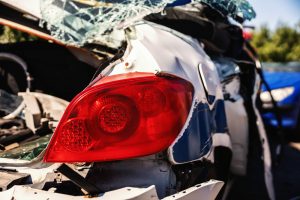 The victim was flown to Massachusetts General where she succumbed to her injuries. The two occupants of the Corolla and the driver of the Ford Taurus were taken to Emerson Hospital with non-life-threatening injuries. Reports of the accident did not indicate whether police charged the Arlington man with a traffic violation.

Liability in a Multiple Car Accident

In some multiple car accidents, sorting out liability and causation can be difficult. In any negligence claim, the burden of proving liability and the cause of injuries rests with the claimant. Chain reaction accidents, like the Concord fatal accident cited above, can sometimes offer complicated scenarios where individual or joint liability is difficult to ascertain as well as which crash, or impact, led to a person’s injuries.

For example, many chain reaction accidents occur during dense fog where visibility on a roadway is extremely limited. Someone rear-ends a vehicle followed by multiple cars crashing into the rear of each stopped vehicle. Motorists have a duty to exercise ordinary care when driving and to drive safely according to the traffic and weather, so presumably anyone who rear-ends another vehicle is liable for the accident. But a struck vehicle in such cases may be impacted several times in a chain reaction accident so determining which impact caused injuries to a certain claimant may be difficult to determine.

In the Concord accident, the Arlington man driving the Jeep Cherokee was apparently solely responsible for the fatal injuries suffered by the Concord woman and for the injuries to the other 3 individuals since his negligent conduct initiated the chain reaction and no other cars rear-ended his vehicle. In this case, it will not matter if the victim’s fatal injuries were initially caused by the rear-end impact or when her Honda Civic was pushed into the rear of the Corolla.

How to Proceed in a Wrongful Death Claim

In Massachusetts, the executor or personal representative for the decedent’s estate brings the wrongful death claim on behalf of the immediate family members. These include a spouse, children, or the parents if there is no surviving spouse or children. Siblings of the decedent may be included if there are no spouse, parents, children or living descendant.

If a spouse does survive, the spouse receives the full share of any recovery. With one child, the spouse and child each receive a half-share. If there are multiple children, the living spouse receives one-third and the children split two-thirds.  If there is a will, this may be different.

Damages in a wrongful death claim vary but typically include:

The clerk of court adds interest of 12% annually to the award dating from the date the lawsuit was filed.

Punitive damages are rarely awarded except in extreme cases. In the Concord case, the car accident lawyer for the decedent’s personal representative will have to show that the defendant’s negligence was particularly egregious if punitive damages are sought. For example, reckless conduct can be shown if the defendant was extremely intoxicated or under the influence of narcotics, was fleeing law enforcement, or speeding excessively. Texting and driving may not arise to the level or gross negligence or malicious or wanton conduct.

Under state law, the personal representative has 3-years from the date of the accident to bring a claim. Only an economic award such as lost earnings is taxable.

Compensation would be sought from the Arlington man’s auto liability policy. Once the limits are exhausted, then the family’s car accident lawyer can seek additional compensation from the decedent’s policy if she had purchased underinsured (UIM) auto coverage. This is optional coverage under Massachusetts law. However, her UIM limits would have to exceed the defendant’s liability limits for the estate to recover additional compensation. For instance, if the decedent recovered the maximum of $100,000, then her own UIM coverage would have to exceed that amount. If it is $150,000, the estate could recover $50,000.

If the Arlington defendant was uninsured, then the limits of the uninsured provision of the decedent’s auto policy can be sought. Uninsured coverage is included in all auto policies purchased in our state.

Compensation for Other Victims

The other victims in the Concord accident can also seek compensation from the defendant’s policy. If the defendant has a $100,000/$300,000 policy for example, then the multiple claimants, including the decedent, will split $300,000 with no claimant getting more than $100,000.

The individuals who suffered non-fatal injuries could likely be fairly compensated with the remaining $200,000 since the wrongful death claim would take the limits of $100,000. If an injured party had more serious injuries, then that party would have to obtain $100,000, or whatever the limits are from the defendant, before seeking additional UIM compensation under his/her own policy, (if purchased) and if the limits exceeded the defendant’s liability limits.

Serious injuries or death from deadly car accidents can cause families to suffer agonizing and life-long consequences. An experienced car accident lawyer from Burns and Jain can discuss the process of a wrongful death claim and what you can do to maximize compensation for the loss of a loved one. Call Burns and Jain at (617) 286-3594 for a free consultation about your injury or wrongful death claim.