A recent fatal car accident on Topsfield Road in Ipswich, Massachusetts highlighted the dangers of texting and driving when a 43-year old woman who was using her smartphone struck and killed a 58-year old bicyclist and injured the cyclist’s wife and 19-year old son who were riding with him. The woman was cited for vehicular homicide by negligent operation; a marked lane violation; and for composing, sending, and reading an electronic message. Massachusetts had passed a law banning all use of hand-held devices last year that became effective on February 23, 2020, though officers were only issuing warnings through April 1. 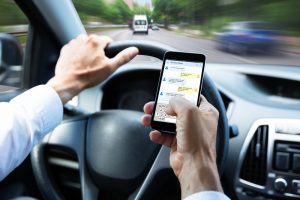 How Dangerous is Texting and Driving?

Safety advocates have been warning the public about the extreme risks to pedestrians, cyclists, and other motorists from texting and driving. For years, Massachusetts legislators debated and ultimately put aside legislation that would have prohibited all use of hand-held devices among all motorists, regardless of age, amid concerns that police would use the ban for racial profiling. Troubling studies out of Florida had confirmed that police there had detained and ticketed far more African American drivers for texting and driving than white drivers. Surveys and studies have consistently demonstrated that illegal use of hand-held phones while driving is not endemic among any one racial group.

Statistics link a high percentage of fatal car crashes to distracted driving that rivals the carnage from drunk driving though the latter is still the major cause of accident deaths. While distracted driving refers to any conduct or behavior by drivers that takes their focus and attention away from the road or use of the steering wheel, use of smartphones is the main practice. There are three aspects of distracted driving:

A survey from the U.S. Department of Transportation in 2019 found that an overwhelming number of respondents use their smartphones while driving. The results indicated:

Studies conducted by the National Highway Safety Administration reported that drivers who text or read their cellphone messages take an average of 5 seconds to do so. At a speed of 60 miles per hour, or 88 feet per second, a car travels nearly 150 yards. This is more than enough distance for a motorist to not see a cyclist or pedestrian on the roadway, and plenty of opportunity for a car to veer into an adjoining lane and cause an accident.

When an accident similar to the one that killed the cyclist in Ipswich occurs, the motorist has few excuses. One of the first questions from an investigating officer to drivers in accidents is whether the driver was using a phone at the time. A quick look at a phone can often reveal if a text message had just been sent or received, whether a phone call was in progress, or the driver was using the phone in some other manner. In the Ipswich accident, either the woman driver admitted to using her phone or she allowed officers to search her phone who found such evidence and she confessed to using it while driving.

Privacy arguments concerning text and phone records are secondary when a serious accident occurs and there is reasonable or probable cause to believe that a cellphone was involved. If the driver at the scene refuses to turn over the phone to police or refuses to answer questions, which a person has a right to do, a car accident lawyer can either ask that the insurer or attorney for the driver turn over records or a subpoena will issue to the phone carrier.

Punitive damages are only available in Massachusetts in wrongful death claims. Whether a driver’s conduct arose to the level of gross negligence is a jury question but generally there needs to be some other egregious behavior that accompanied the act of driving while distracted. This may entail driving at an excessive speed, weaving erratically through traffic, racing, or videotaping yourself performing some stunt. If such damages are awarded, the plaintiff will have to collect them from the defendant personally since auto or home owner’s insurance will not provide coverage for these damages.

If you were injured or a loved one sustained fatal injuries in a car accident, you will need the skills and knowledge of an experienced car accident lawyer from the law office of Burns and Jain. Call us at (617) 227-7423 to schedule a free consultation about your injury or wrongful death claim.