In April of this year, another tragic accident occurred on Massachusetts Avenue at its intersection with Harrison, just across from Boston Medical Center when a tractor-trailer struck and killed a bicyclist who was apparently walking his bike through the intersection when he was struck. There are traffic lights at this intersection and reports did not indicate if the cyclist was crossing on a green light or if he was struck while walking in the same direction as the truck. 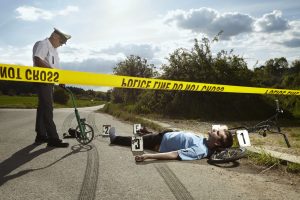 Massachusetts Avenue has long been seen as a particularly deadly street with a 97% higher crash density than other streets where injuries to pedestrians and bicyclists have occurred. Just weeks before this accident, a pedestrian was struck and killed one block away at Massachusetts and Albany Street.

At this stretch of Massachusetts Avenue, there is a “bicycle only” lane that is painted with bright green markings that motorists should easily see. Whether this played any role in the truckdriver’s apparent failure to either observe the man walking his bike across the avenue and avoid him remains to be seen.

Massachusetts Avenue has been the focus of community concern for several years but efforts to install safety features here and at other particularly hazardous intersections have been difficult to implement. The presence of Boston Medical at the Harrison Avenue intersection has hindered some progress, but safety advocates are now saying that the pandemic that has resulted in empty streets now provides an opportunity so long as funds are available.

Boston has embraced a program called Vision Zero, which was begun some years ago in Europe and now emulated in a number of U.S. cities with the aim of reducing traffic deaths to zero by mid-century. Some of the measures suggested in the program include:

Speed bumps could slow traffic as it approaches a dangerous intersection. Awareness campaigns do help but having physical measures in place are more likely to make motorists aware of pedestrians and cyclists. Intoxicated or distracted drivers will ignore any precautions, however, so that is a factor that only strict law enforcement and penalties can possibly address.

For Massachusetts Avenue, safety engineers need to determine if there are specific reasons why certain stretches of this road pose unreasonable risks to pedestrians and cyclists and how to eliminate them.

Hopefully, cyclists and pedestrians can look out for their safety, especially in “high crash network” areas. Some suggestions for pedestrians and cyclists are:

Many bike accidents and deaths occur because a motorist failed to notice the cyclist or made a turn directly into the path of a bike. If there is a bike lane, motorists often ignore cyclists approaching from their rear when making a right turn. Under state law, a motor vehicle must keep a space of at least 3-feet from a cyclist unless conditions make it impossible.

In the above case, it appears that liability must rest with the truckdriver. The cyclist was observed to be walking his bike in a crosswalk and obeying the traffic laws when the tractor-trailer driver presumably did not see the man when he either turned into the man’s path or while he was driving across the intersection.

It is questionable whether the city, which presumably is responsible for the design and maintenance of the street where the accident occurred should be held accountable. Although the intersection is a high-risk area, the negligence of the truck driver was the main and likely only contributing factor. Experts in road design might be able to establish that particular safety measures, if in place, could have reduced the risk of this accident or even prevented it. This would be an issue for the jury to consider since there would competing opinions on whether the city or other entity responsible for ensuring safety on our streets was negligent, and if it had opportunities to install safety measures that might have prevented the accident.

Witnesses to the accident can certainly attest to negligence by the truckdriver who might contend that the cyclist suddenly darted out into the street as his only defense. A car accident lawyer would have to review the police report on the fatality and interview witnesses who saw the accident unfold. Absent evidence that the decedent suddenly ran out into the street, the truckdriver evidently either ran a red light, turned into the man’s path of travel, or came too close to him when passing.

If you were injured or a loved one sustained fatal injuries in a car or bicycle accident, you will need the skills and knowledge of a veteran car accident lawyer from the law office of Burns and Jain. Call us at (617) 227-7423 to schedule a free consultation about your injury claim.