Most Massachusetts motorists are probably unaware that their vehicle, if manufactured in 2013 to the present, has a black box, similar to those found in airplanes. Called an Event Data Recorder (EDR), these devices can offer valuable information in an accident investigation. However, they can and do, like just about any app found on your smartphone, gather certain private data that is often sold to marketers or others. 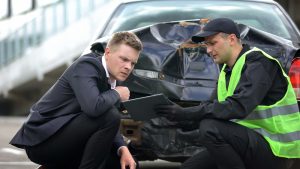 Your EDR is constantly recording data as you drive on braking, steering, speed, and if you were wearing a seat belt. It gives readings concerning the engine’s RPMs, throttle position, air bag deployment. and changes in velocity. If the airbag does deploy, the EDR records all this data 20-seconds before to 5-seconds after it is deployed.

However, police will not likely touch an EDR in an accident unless there was a very serious or fatal accident or there are criminal charges, and there are questions or issues regarding the cause of the accident and liability. It costs thousands of dollars to retrieve the information so it would not be cost-efficient in any typical accident.

Unless, of course, you are one of the state’s top officials and were involved in a single vehicle crash that totally wrecked the state-owned vehicle that you were driving, and there are questions about why you were even driving at 5:00 am on an icy roadway. This was a question that dogged Massachusetts Lt. Governor Timothy Murray about his having totaled a state-owned 2007 Ford Crown Victoria on I-90 in November 2011 that he fortunately was able to walk away from.

Murray told police that he had gone out to view storm damage that had downed power lines when his vehicle apparently hit an icy patch of road before striking a rock ledge and rolling the vehicle. He also said that he was traveling at the speed limit of 65mph and was wearing his seat belt before he presumably fell asleep. Murry requested and took a breath test at the scene that did not detect the presence of alcohol.

But the Boston Herald was not entirely convinced of Murray’s explanation and made a public records request for the EDR data that state police initially resisted complying with, even after the Secretary of State weighed in to get police to release the data. Finally, Murray agreed to the release of the data, citing his status as a public servant who must be transparent in matters like this. The Boston Herald paid the cost for retrieving the data.

The data revealed that our state’s second in command was not exactly truthful in his version of the accident. It showed that while Murray had not braked before the impact that might suggest he had fallen asleep, his vehicle had accelerated from 75 mph to a top speed of 108 mph in the seconds before impact at 92 mph, far above the 65 mph speed he insisted he was at before the accident. Further, he was not wearing a seat belt despite claiming otherwise. Although Murray continued to insist that he had fallen asleep, which police also accepted, one accident reconstruction expert doubted that, commenting that motorists who fall asleep rarely have a foot on the accelerator and that he had never seen an incident where a vehicle accelerated under such circumstances. After the information was made public, police promptly fined Lt. Governor Murray  $555 for speeding and not wearing a seat belt. Murray did say he would pay the fine and for the property damage personally.

Lt. Governor Murray probably had little choice but to release the EDR information in the face of public scrutiny and persistent questions. We do not know if he was aware of what the EDR would reveal, but he must have been cognizant that his version of facts would be contradicted by the data. With his political future no longer as bright, Murray resigned his post in 2013 to head the Worcester Chamber of Commerce.

How an EDR Can Help Your Claim

Your car accident lawyer can subpoena the records or the EDR itself in such cases. An expert would be retained to retrieve the data that might involve adhering to a recognized protocol that includes photographing the inspection, investigation and downloading process; establishing the proper chain of evidence and storage of the data; and filing a complete report. Issues that the EDR can address are:

A car accident lawyer from Burns and Jain can discuss with you whether retrieving data from an EDR should be considered in your case if it can provide valuable information and evidence regarding liability.

Consumers should always be concerned about the release of their private data or conduct. We have no way of knowing if data on our shopping, eating, viewing, or driving conduct identifies us in any way and leaves us vulnerable to unwanted marketing, hacking, or scams. Maine is one of 15-states that allows motorists a choice on whether to release the data recorded on their vehicle’s EDR.

As a practical matter, the data can be subpoenaed in a serious or fatal accident or criminal matter. Experts also say that there is no guarantee even with these privacy laws that your data will not get into the hands of whoever truly wants it.

Experienced car accident lawyers from Burns and Jain have handled countless difficult injury claims and obtained millions of dollars for our injured victims and their families. We will thoroughly investigate your accident and use all resources and tools to support your claim and your damages so that you have the best opportunity to receive the most compensation available. Call us at (617) 286-3594 for a free consultation about your injury claim.