Two rollover accidents involving tractor-trailers occurred recently on I-291 in Springfield and I-91 with the truckdriver in the first accident suffering serious injuries. State transportation authorities expressed concern about the rising incidences of such accidents, especially in western Massachusetts. 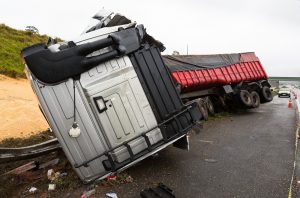 News reporters asked Massachusetts truck drivers about the risks of driving a large truck and what accounted for the high number of rollovers. One driver said that truckers have to take care of ourselves and slow down. Others said that they have to contend with passenger cars that frequently cut in front of them, forcing them to swerve, or have to take emergency action when a car cuts in front and then immediately slows down or stops. An ordinary passenger car that weighs 4,000 to 5,000 pounds at 65 mph can come to a complete stop in 124 feet.. A fully loaded 80,000-pound tractor-trailer at the same speed takes 524 feet to stop. However, studies on rollover accidents came to other conclusions about the cause of these accidents.

Trucks are More Prone to Roll-Overs

The Federal Motor Carrier Safety Administration (FMCSA) has studied truck safety and rollover accidents and came to a number of conclusions. First, trucks are inherently susceptible to roll-overs because of their high center of gravity and commonly unstable loads. A rollover typically occurs when a truck is on a curved path and the centrifugal forces cause it to lean away from the direction of the curve.

A comprehensive FMCSA study found that half of rollovers occurred from drivers failing to adjust their speed to curves in the roadway, to the loads being carried, the condition of the brakes, and the roadway surface. The second most common factor was the driver’s inattentiveness caused by distraction or fatigue. The third factor was driver mismanagement of the vehicle, oversteering, or not steering enough to remain within the traffic lane, and overcorrecting where they have to counter-steer to remain on the road. The authors of the study also noted that many drivers’ failure to recognize the nature and extent of their load such as its weight and height is another factor that if overlooked can have dire consequences.

Too frequently, fatigue is a major factor in truck and rollover accidents. FMCSA regulations state that truck drivers are only allowed to drive up to 11-hours over a 14-hour shift followed by a rest period of at least 10 consecutive hours. Car accident lawyers handling truck accident cases often find that drivers violate this law in trying to meet deadlines, obtain bonuses, and other reasons. Also, drivers are generally poorly trained on rollover prevention with most only receiving a printed publication from their employer rather than on-the-road or simulated driving exercises. Even videos on this topic would help but few companies require their drivers to view them. Independent truckers should undergo training on their own.

The conclusion of the authors from the above FMCSA study was that driver error was overwhelmingly the cause of tractor-trailer accidents including rollovers. Excessive speed on curves, misjudging the sharpness of a curve, drifting off the road from distraction or fatigue requiring sudden or abrupt counter-steering were the main culprits. But any investigation of a truck accident should also consider the condition of the brakes, tires, suspension, and poorly distributed or unstable loads as other factors. These are all the responsibility of the truck driver who is required to conduct a pre-inspection check of his/her vehicle.

Truck drivers are commercial drivers and trucking companies are commercial carriers. They are held to a higher standard of care since they are transporting large cargos, some of which may be hazardous. There are numerous regulations that drivers and companies must adhere to, or they can readily be found liable in an accident.

Damages in a truck accident can be substantial resulting in catastrophic and permanent injuries. Damages may include:

Truck accident injury claims require the legal services of highly experienced and knowledgeable car accident lawyers who have successfully handled such claims. The lawyers at Burns and Jain have obtained millions of dollars for injured clients and their families in trucking and other accident claims. Call us today us at (617) 286-3594 for a free consultation about your injury claim.