A 21-year old woman was recently identified and arrested for having struck and seriously injured a female pedestrian on Chandler Street in Worcester, Massachusetts on the evening of January 14, 2020 before fleeing the scene. The accident occurred after another motorist from the opposite direction had stopped to allow the pedestrian to cross. Police had been advised to look for a female driving a red car. 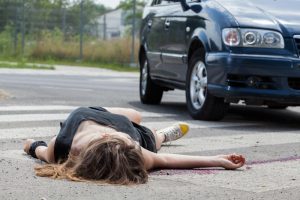 The negligent driver defendant was charged with leaving the scene of a personal injury accident, negligent operation of a motor vehicle so as to endanger, speeding, failure to slow for a pedestrian, failing to report an accident, failure to display headlights, and use without authority.

How Did Police Identify the Driver?

Police did not disclose how the defendant driver was identified, but there are numerous ways that hit-and-run drivers are located:

Why do People Flee Accident Scenes?

People flee accident scenes for various reasons, even knowing that a person may have been seriously injured or killed. These include:

It is a misdemeanor to not stop and exchange or leave identifying information including driver’s license, registration, and insurance. If the driver fled an accident where a serious or fatal accident occurred, it is a felony.

The pedestrian injured in the Worcester accident was fortunate that police located the offender, but it was unclear if the person or the auto involved was covered by insurance. If the vehicle was stolen, the insurer for the car is not obligated to compensate the injured pedestrian. Since the driver was charged with use without authority, it is unlikely the vehicle’s insurance, if any, would cover the pedestrian’s damages absent other circumstances.

However, the injured pedestrian could use her own auto policy’s uninsured motorist provision (UM) for compensation if she had an insured vehicle. She can also utilize the policy of a household member, like a spouse or parent, who does have UM coverage. UM coverage is also available in hit-and-run accidents where the other driver is never found, so long as you can prove that the fleeing motorist negligently caused your accident. Also, you and your car accident lawyer still must prove your damages as if you were suing a third party. If your case cannot get resolved through negotiations, it goes to binding arbitration instead of trial.

Since Massachusetts is a no-fault state, the injured party can receive PIP or personal injury protection, benefits from her own insurer regardless of fault. This can pay medical and lost earnings of up to $2,000 if the insured has private insurance, or up to $8,000 if there is no health insurance or the victim has Medicare, Medicaid, MassHealth or ERISA. The threshold requirements for bringing a claim for pain and suffering and other damages are only $2,000 in medical expenses or if you sustained a serious and disfiguring injury, a fractured limb, loss of sight or hearing, or loss of a body part, or death.

Your UM benefits mirror that of your auto liability limits. If you have the state’s minimum coverage of $20,000/$40,000 for bodily injury, then you can only collect up to $20,000 under your UM coverage. This is why it is so important to purchase limits of at least $100,000 since a catastrophic injury can cost you tens of thousands of dollars in medical expenses and lost earnings alone if an uninsured driver causes your accident.

You should have an experienced car accident lawyer in any kind of injury accident involving a motor vehicle. Issues of insurance coverage, liability, responsible parties, the cause of your injuries, and proving your damages can present difficult challenges in many cases. Call the law office of Burns and Jain at (617) 286-3594 for a free consultation about your injury claim.