In case you missed it, red light cameras may be coming to Massachusetts. Haven’t many folks tried to beat a light, knowing that there are several seconds between the time the light turns red and crossing traffic gets a green light? Now, however, if a bill passes in the state senate, you should think twice about doing that again. Last reports are, though, that the bill is stalled and tabled for the time being. 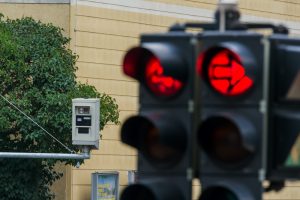 In considering privacy concerns, only the rear license plate of the offending vehicle is photographed. No photo will be taken of the driver or of the car’s contents, and the photograph will be destroyed 48-hours after the matter is resolved. A citation would be sent to the vehicle’s registered owner, regardless of who was driving.

However, a notice of the violation is not sent to the RMV or made a part of the owner’s driving record. And fines are only up to $25. Installation of a camera would have to be approved by the city or town’s mayor, manager, or board of selectman and only after a public hearing. Drivers approaching the selected intersection would be notified by a clear and unobstructed sign that there is a traffic camera in use ahead.

Hundreds of people are killed each year by cars running red lights. According to the Insurance Institute for Highway Safety (IIHS), there were 890 fatalities attributed to red light violations and 132,000 injuries nationwide in 2018. A 2003 study cited by the IIHS found that there was an average of 3.2 violations per hour at four intersections that were studied that did not have traffic cameras.

Limited police and resources are arguments for the cameras with their automatic enforcement of traffic laws. Also, most studies have demonstrated that the traffic cameras are a deterrent to running red lights. In a study conducted in three large Texas cities, the presence of the cameras did result in a substantial reduction of vehicles running red lights. A similar study in Virginia found that red light cameras reduced violations by 67%.

However, these and other studies concluded that although fewer motorists were entering intersections on the red where cameras were placed and motorists given notice, the overall rate of accidents did not decrease. The reason given by the study’s traffic scientists is that by motorists slowing down and stopping instead taking the chance of entering the intersection on a yellow light, this only increased the rate of rear-end accidents. In the final analysis, there was no statistical difference between the number of accidents at these intersections before and after the red-light cameras were installed. In Houston not that long ago, a referendum passed that did away with the cameras.

This is not to say that traffic accident rates at certain intersections may decrease, especially since the cameras would also photograph those motorists who turn right despite signs prohibiting turns on red lights, or who speed through intersections. Presumably, the cameras would be installed at the most dangerous intersections and at those with higher rates of angle crashes that come with T-bone collisions that are more severe than most rear-end crashes. It helps that the cameras do allow cars to enter while the light is still yellow that does away with complaints about hair-trigger cameras.

Studies should be conducted to determine the effectiveness of traffic cameras, if and when the bill permitting them passes, and the results released to the public. Hopefully, drivers will slow down and not be so eager to run the light if they know they are on camera.

Red light accidents can be catastrophic. A car racing to beat the light may not enter until well after the light has turned red and result in a serious or fatal collision with another car or pedestrian. An experienced car accident lawyer from Burns and Jain can investigate the accident as well as obtain all documents and other evidence to prove your damages. Only with a skilled car accident lawyer can you hope to obtain the compensation that you deserve for your injuries.