Unlike the trend in the rest of the state, Peabody, Massachusetts has been experiencing fewer car accidents in the past several years. In 2019, the city had 979 motor vehicle accidents, its lowest number since 2010. These accidents involve cars, motorcycles, bicyclists, and pedestrians. 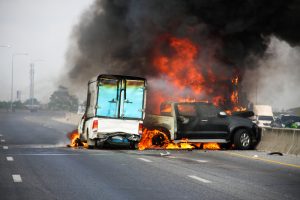 Peabody had its highest number in 2016 when it saw 1,493 incidents. However, the number of accidents where there were reported injuries has declined in each of the past 5-years. Although our state overall had  a slight decline in accidents in 2017 and 2018, there had been increases in each of the prior 8-years.

Peabody has had a steady number of two-car accident fatalities since 2007, which is the earliest date when the city kept such data. Not surprisingly, most accidents are on Route 1. Other areas having the majority of accidents in Peabody are at the intersections of Lowell and Endicott Streets, and at Central and Tremont and Andover.

A breakdown on the 979 accidents in 2019 indicated that 194 were “older-related,” and 158 as “young-driver” related. Six accidents involved bicycles and 9 involved pedestrians. Peabody has a population of over 53,000 residents but its median age of 44.7 is 13% higher than that of the state, which is 39.4. The national median age is 37.7. This may account partially for the higher number of “older-related” accidents.

What Accounts for Fewer Car Accidents?

There are no readily apparent reasons for why Peabody is experiencing fewer car accidents than most of the state. However, cities and towns that make resources available to study and implement safety measures to reduce accidents often see their efforts rewarded.

Most safety measures designed to reduce accidents include:

Are Older Drivers Less Safe than Younger Ones?

Older drivers do tend to be more vulnerable in sustaining injuries given age-related infirmities. Though drivers who are at least 70-years of age have higher crash rates than middle-aged drivers, they are still below that of younger motorists. Most car accidents involving older drivers involve overtaking other cars and in making right turns, according to a Swansea University study, while younger drivers get into accidents from speeding and loss of control. Younger motorists are also more likely to be impaired and/or distracted. In that same study from Swansea, drivers age 17-21 were 3-4 times more likely to have an accident than 70-year old motorists.

But if you have an older parent (at least 65), you might want to sit down and talk with him/her about their habits and driving conduct if you have concerns. Your inquiry might include:

While age 65 is not that old, reflexes do tend to slow down and cognitive function begins to decline, though for some this may come at an older age. If you notice that your loved one is experiencing a very apparent mental and physical decline combined with any positive responses to the above inquires, then it may be time to discuss having them relinquishing their license.

If you or a loved one sustained injuries in a car accident, you will need an experienced car accident lawyer to handle the claim. Issues regarding liability, other responsible parties, insurance coverage, and damages are common in the majority of car accident injury claims that only a knowledgeable car accident lawyer should handle to your benefit.