In a horrific accident last October, a Massachusetts state police officer was killed when a motorist lost control of his vehicle on I-90 in Charlton, sped across several lanes of traffic, and struck the officer’s parked police cruiser, causing him fatal injuries.  The driver was suspected of being high on marijuana since officers reported that the defendant had been seen leaving a medical marijuana dispensary earlier that day and presumably exhibited signs of being under the influence. 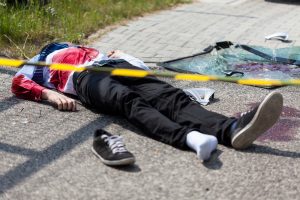 The defendant was charged with various counts including manslaughter, and vehicular homicide by negligence and by reckless driving among others.  He was facing up to 12-years in state prison. His defense was that he had suffered a seizure that led to his erratic driving and loss of control.

Stoned driving is as nefarious as intoxicated driving.  While some may argue that being high on drugs while driving is not the same as driving drunk, studies show otherwise.  Similar to being under the influence of alcohol, drugs impair your judgement and reaction time. A European study found that drivers with THC in their blood, the compound that induces the euphoric effect, were twice as likely to be responsible for a fatal car crash then those who were sober.  The higher the level of THC, the more the risk increased. The study also found that many of the drivers with THC in their blood who were involved in fatal car crashes also had alcohol in their system.

For drugs like cocaine or methamphetamine, studies from the NCBI (National Center for Biotechnology Information) found that drivers who had ingested these substances exhibited increased risk taking.  Typical driving conduct included drifting out of a traffic lane, speeding, weaving, and erratic driving. As a corollary to methamphetamine use, the study also found that withdrawal from methamphetamine use included fatigue and hypersomnolence where the driver would suddenly fall asleep.

Unlike alcohol impairment, Massachusetts does not have a standard, level or degree of a drug’s presence in your system whereby you are legally presumed to be under the influence.  However, officers at the scene of an accident or suspected DUI are often trained to identify signs of drug ingestion such as slurred speech, hyperactivity, confusion, or other erratic behavior.  An eye test given at the scene known as horizontal gaze nystagmus (HGN) was designed to detect the presence of drugs. The officer moves a stimulus such as a pen across a suspect’s eyes to note an involuntary jerking of the pupils that allegedly indicates that the person has alcohol or a drug in his system.

If the driver fails the HGN test or otherwise exhibits bizarre behavior consistent with drug use, and a blood test detects the presence of a certain drug, it is not necessarily conclusive evidence that the driver was responsible for causing your injury accident.  There must be driving conduct that was negligent, such as speeding, running a red light, failing to stop at a stop sign, making an illegal or unsafe turn, or driving across several lanes of traffic at once. This is strong proof that the defendant’s drug use caused the accident.

However, if there is a dispute over liability and the defendant is found to be under the influence of drugs or alcohol, then the defendant’s version may be suspect or have less credibility. Still, it will likely take more evidence to prove liability in such cases.

Injuries in a stoned driving case are often serious if not catastrophic.  If the defendant driver is found to be under the influence, insurers are often more motivated to settle.

In circumstances where the driver was uninsured, then you can seek compensation under the uninsured provision of your own insurance policy.  If the defendant driver had insufficient liability limits such as $20,000, you can seek additional compensation under the underinsured (UIM) provision of your own auto liability policy so long as you purchased it since it is optional. Your UIM limits must exceed that of the defendant’s liability limits for you to recover. For example, if the driver had $20,000 in liability and your UIM limit was $100,000, then you can seek up to $80,000 from your own insurer once you recover the $20,000 from the defendant’s insurer.

There are other possible avenues of compensation.  If the stoned driver had also been drinking, then you may have a dram shop claim against a social host, bar or restaurant if the host or establishment employee served the defendant who was visibly intoxicated, and it was reasonably foreseeable that the defendant would drive.  While it may be difficult to locate witnesses, who could attest to the defendant’s intoxicated state, circumstantial evidence could prove it. For instance, if the accident occurred minutes after the defendant left the party or bar, and he was obviously under the influence and had an elevated BAC level, this might serve as valid evidence of dram shop liability.

If there was a fatal accident, the family of the deceased victim could seek punitive damages against the stoned or intoxicated driver.  Punitive damages in Massachusetts are only available in wrongful death claims. Further, they are only awarded if the defendant’s conduct was malicious, willful, intentional and reckless. Driving stoned or drunk by itself may not qualify, but if combined with extreme conduct such as driving at 90 miles per hour or crossing several lanes of traffic at a high rate of speed, then this is likely sufficient.

The administrator or executor of the decedent in a fatal car accident claim can bring a wrongful death claim on behalf of the immediate family members.  In the matter of the state police officer killed by the allegedly stoned motorist, the family would be pursuing a claim against the motorist’s insurer.

In most cases, the liability limits in the typical auto policy are woefully insufficient to compensate the family in a death case.  Hopefully, the decedent had UIM coverage that could provide additional compensation. Along with investigating possible dram shop liability if alcohol was involved, a resourceful car accident lawyer can examine whether roadway design or sufficient safety barriers were in place on the roadway that could have prevented the accident. This is sometimes observed in cases where a defendant crashed through a median or a defective barrier was unable to prevent a car from sliding over an embankment or elevated roadway.

Damages in a wrongful death claim usually include:

Stoned driving accident claims may involve serious or fatal injuries that requires the services of a veteran car accident lawyer so that liability can be established, and all avenues of compensation explored. Trust your injury accident or wrongful death claim to Burns and Jain who will ensure that you and your family can obtain the compensation to which you are entitled. Call us at (617) 249-6763 for a free consultation about your injury claim.