Last month, a 62-year old Woodstock woman was killed when she apparently lost control of the 53-foot truck she was driving that was transporting methane gas, a hazardous material, and crashed through a guardrail before the truck rolled onto its side.  Police were still investigating the incident to find out why the truck suddenly left the roadway on Route 2 in Orange. Fortunately, no other vehicles were involved. 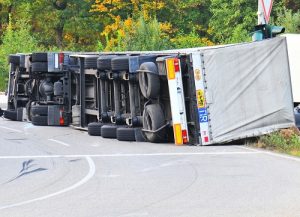 While passenger vehicles considerably outnumber large trucks on our roadways, the size, weight, and the materials large trucks transport can inflict enormous damage and carnage.  Common factors in truck accidents include:

Driving a large truck requires considerable skill and training.  Drivers are required to meet certain standards, to pass physicals and drug tests, and to be sure that they perform pre-trip inspections and that their loads are secure.  Drivers are limited by state and federal regulations in this regard and in the hours they drive.

The FMCSA can impose fines on drivers and companies for violating these rules.

Most trucks are now equipped with on-board electronic monitoring devices called electronic control modules (ECM) or event data recorders (EDR) that can provide valuable data and information that an experienced truck crash lawyer can use to find liability on the part of the truck driver or trucking company. Recorded data includes:

Data from these devices can be lost following an accident.  It is essential that you immediately contact an experienced truck accident lawyer after a serious or fatal truck accident to ensure that the data from an ECM or EDR is downloaded and done properly.  If the trucking company refuses to hand over the data, your lawyer will have to file a lawsuit and a temporary restraining order to prevent destruction of this essential evidence.

Further, as a commercial carrier, drivers and their companies are held to higher standards of care than that imposed on ordinary motorists.  For instance, commercial drivers are considered under the influence of alcohol if their blood alcohol concentration (BAC) is 0.04%, considerably lower than the standard 0.08% for non-commercial and cab drivers. Further, a trucking company will be held vicariously liable for the negligent conduct of its driver.

In the case of the Woodstock driver, her family can certainly receive death benefits under worker’s compensation.  However, if other parties contributed to her death then a third-party claim might be asserted. For instance, if the airbag failed to deploy, the truck manufacturer might be held liable for her death if experts can show that it would have prevented fatal injuries.  If a third party had negligently failed to secure the load or to maintain the truck’s brakes or steering that failed, that party could also be held responsible. If another vehicle was the cause of the accident, that driver can be held responsible. Only a seasoned and knowledgeable truck crash lawyer can fully explore these possible avenues in obtaining full compensation for injuries or death.

Damages in truck accidents can be extensive. They may include:

If there were fatal injuries, then the administrator for the decedent’s estate may bring a wrongful death claim for damages that include:

Retain a Truck Crash Lawyer from Burns and Jain

Truck accidents can be complex and require special knowledge and skills in fighting trucking companies that will employ teams of experienced and well-funded attorneys to defend them. Retain the Burns and Jain law office to handle your truck accident claim to ensure you get the representation that you deserve. Call us at 617-227-7423 for a free consultation about your truck accident injury claim.