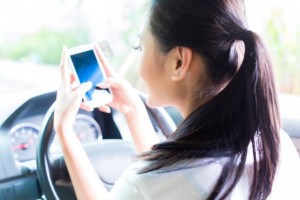 Car accidents happen every day for a variety of reasons.  Fatigue, intoxication or impairment from drugs, overly aggressive driving, speeding and ignoring red traffic signals are a few.  In the past decade as cell phones have become more ubiquitous and texting and emailing major functions of smartphones, distracted driving has become a major concern.  And along with these cell phone activities are social media sites that are now being blamed for causing serious and fatal car accidents.  The issue then becomes whether social media car accidents should result in those sites being held civilly liable.

This concern was highlighted in an Atlanta car accident that left an Uber driver with traumatic brain injuries.  The responsible party was a young woman who admitted to using the media site, SnapChat, to take a selfie while travelling at speeds that topped out at 113 mph.  When the Uber driver tried to merge onto a 4-lane highway, the young woman struck the vehicle at a speed estimated at 107 mph.  Undaunted by the accident, the young woman continued to use SnapChat while being lifted into an ambulance with blood streaming down on her face and posted “Lucky to be alive” while taking a photo of her face.

SnapChat is a site where users can take selfies or other photos and send them to viewers.  The images disappear as soon as they are viewed.  The site boasts a speed filter that indicates how fast the user is going when the photo is taken.  The driver in this case admitted that she was trying to go as fast as she could when snapping the selfie.

Attorneys for the victim are suing the driver for negligently operating her vehicle but are also suing SnapChat.  A spokesperson for SnapChat denied that it encouraged persons to use the site while driving and pointed to a warning on the speed filter that told users to not use it while driving.  If so, then why have the filter at all?

All states have laws banning use of cell phones, including texting, while driving to some degree. Studies have definitively shown that the average time a person spends texting while driving is 4.6 seconds.  Since a car at 60 miles per hour travels 88 feet per second, it can cover nearly 405 feet or 135 yards, well beyond the length of a football field.  Braking time is 4.5 seconds and covers 271 feet for a total of 676 feet from the time the driver begins to text to stopping after perceiving and reacting to a hazard.

Your reaction time is slowed considerably when using your cell phone.  An intoxicated person experiences a slower reaction time while a cell phone user’s time in perceiving and reacting to a hazard is 38% slower than someone who is not distracted.

Teens are more prone to text and email while driving and to use social medial sites. Many grew up using social media sites like Facebook and Twitter and have been using cell phones since elementary school.  The temptation to post selfies, traffic or weather conditions or any other observations while driving can be irresistible, especially since about 70% of drivers have texted while driving according to an AT&T poll of its users who drive.  The same poll showed that 40% tap into a social media site while driving. 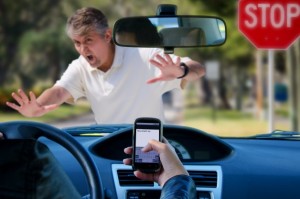 While these activities certainly point to those who drive and engage in smartphone activities as liable for causing a car accident, would the law consider such social media car accidents as conferring legal responsibility for injuries on the media site owners?

Although a warning on its speed filter about using it while driving may be akin to those on cigarette packages warning users about the health risks of smoking, SnapChat appears to encourage use of its site regardless of any warning.  One distracted driving lawyer has argued that SnapChat’s misuse of its app meets product liability principles since it was placing its product on the market without testing it or providing adequate warnings.  Accordingly, it is introducing a product that is unreasonably dangerous if used while driving. The speed filter, despite the warning, was arguably intended to be used while driving since the user’s speed is listed with the photo.  Further, SnapChat was on notice of people causing car accidents while using the speed filter.

Currently, SnapChat has not been found civilly liable for any car accident injuries nor has any other social media site.  Motorists are aware that using a smartphone while driving is unlawful and can lead to serious accidents.  Still, tobacco companies continue to be held liable for causing lung cancer and other fatal conditions despite decades of warnings of the dangers of smoking.

If Injured in a Car Crash

If you were injured in a car accident, you might be able to show that the responsible driver was using a smartphone.  If the car suddenly left its lane of traffic, rear-ended another car with no evidence of braking or flew through a stop sign or red light that was caught on film, then you could surmise the driver was distracted.  Your attorney can subpoena the driver’s cell phone records as well to see if the person was texting or on a social media site when the accident occurred.

It may take a severe case like the one mentioned herein where the driver was “urged” to speed excessively while driving when using SnapChat before colliding with another motorist who suffered incapacitating brain injuries to convince the courts that SnapChat owed a duty of care to its users.

Damages in severe cases like the Uber driver and SnapChat driver may include:

Some states might permit a claim for punitive damages against the driver if not the social media site.  Such damages are generally permitted if the defendant was grossly negligent or exhibited a willful disregard for the rights and safety of others.  Driving at 107 miles per hour on a 4-lane highway while snapping a selfie might qualify for punitive damages in a wrongful death case in Massachusetts.   As for SnapChat, if it is held liable at all, allowing such damages might be more difficult.

Issues regarding holding entities like a social media site civilly liable present intriguing questions of law and moral responsibility.  Proving liability and obtaining sufficient compensation for catastrophic injuries requires the dedication and focus of a distracted driving lawyer like Neil Burns. Contact the Law Office of Neil Burns, a Boston personal injury lawyer, who has been representing accident victims in Boston and throughout Massachusetts for over 30 years if you or a loved one was injured in a serious car accident.