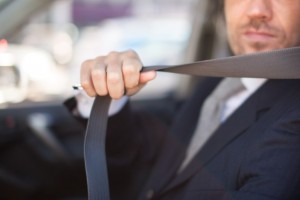 Seat belts in passenger vehicles first became mandatory for car manufacturers in 1968 though it was not compulsory for occupants to use them until New York became the first state, in 1984, to require all occupants to be buckled up.  Over the years, seat belt use has definitively shown to save lives and now every state, except Vermont, requires that passengers be secured in cars, pickups and commercial vehicles except for buses.

However, regardless of decades of laws mandating use and driver education on the life-saving benefits of wearing a seat belt, a certain group of Massachusetts males seem not to have noticed according to studies.  To counteract this behavior, Massachusetts highway safety officials have launched a seat belt awareness campaign to educate and to get young males to wear their seatbelts and save lives.

The age group that uses seat belts less often than others and less than its female counterparts is the 18 to 34 year old demographic. Males are often portrayed as maturing later than females and their refusal to wear a seat belt may be an indication.  Many males in this age group feel invincible and getting behind the wheel of a pickup truck or commercial vehicle only adds to that false sense of security.

Massachusetts Lags Behind in Safety

To be sure, Massachusetts residents overall fall below the national average in seat belt use with only 74% buckling up. The national average among all drivers is 89%.  Regarding those Massachusetts operators who drive pickup trucks, only 56% wear a seat belt.  The rate is even lower among the state’s commercial truck drivers where only 46% wear them.  In accidents involving 18-34 year olds who drive these vehicles and were fatal accident victims, 59% were not wearing their seat belts.

Enforcement is the key whenever officials decide to focus on a particular safety measure.  Over 200 local police departments are participating in the seat belt awareness campaign, which is part of the national “Click it or Ticket” campaign.  Billboards will remind motorists to wear their seat belts as will TV ads.  In one TV advertisement, a voice warns people that getting into an accident without wearing a seat belt can result in your head striking the windshield with the force of a 10 pound sledgehammer falling from a 5-story building.  It is hoped that this graphic information will at least force motorists to consider wearing their seat belts before an accident happens.

Officials are also advising motorists that wearing your seat belt is the best defense against intoxicated, overly aggressive and distracted drivers.

If you were injured in a car accident that was caused by the negligent conduct of another, you may be entitled to compensation. Damages in a severe auto accident may include:

In a wrongful death action, the immediate family of the decedent may seek the following:

Any major personal injury matter should be handled by a competent professional. Neil Burns has been a Boston Car Accident lawyer for over 30 years and has obtained millions of dollars in compensation for his injured clients in all types of motor vehicle accidents. Call his office today for a free evaluation of your injury claim.