A January 2021 car accident involving an Amazon van driver and a 31-year-old Milford, Massachusetts man who suffered permanent and life-altering injuries has led to a lawsuit against the delivery giant.  Amazon is a major distributor of packages in the U.S. and maintains warehouses and distribution centers throughout the nation.  Milford has two Amazon warehouses. 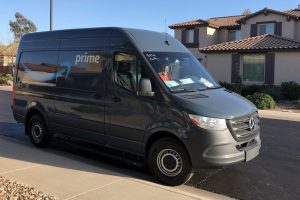 The accident occurred around 7:00 p.m. when the delivery driver apparently fell asleep at the wheel.  His van was eastbound on Route 109 near I-495 when it crossed into the westbound lane and collided head-on with the Milford man’s vehicle.  He suffered compound fractures of his tibia and fibula along with a traumatic brain injury.  According to the Complaint filed in Superior Court, the victim is unable to return to his previous job at Raytheon and faces possible amputation of his leg.

This is not the first time that Milford residents and officials have dealt with complaints and other accidents involving Amazon delivery vans.  Apparently, there have been 40 reported incidents to Milford police concerning Amazon van drivers since 2017, although that number could not be confirmed since many of the delivery vehicles are owned by third party entities.  Complaints have ranged from drivers clogging up roadways when delivering packages, throwing trash out of their van windows, running red lights, and violating other traffic laws.

The lawsuit contends that Amazon skirts commercial driving regulations by having its drivers in vans that do not require a commercial driver’s license to operate.  If in a commercial vehicle, then state and federal regulations dictate how many hours a driver can operate the vehicle in a day and week, and how many hours of rest are required before a driver can resume operations. Training and drug tests are part of commercial driver requirements.  Amazon’s drivers are not always trained, and some are unqualified due to unsafe driving records. Their insane work schedules also have resulted in drivers blocking traffic to deliver packages, making illegal turns, and ignoring traffic signs in an effort to meet their delivery quotas for the day.

According to the lawsuit, Amazon requires its drivers to deliver a minimum of 150 packages that often takes 12 or more hours.  To meet the delivery schedule, drivers are forced to skip bathroom and meal breaks.  The delivery driver in the Milford accident reportedly had delivered 200 packages during his schedule, which left him extremely fatigued.  The lawsuit cites numerous examples of citizen complaints and police reports of other accidents involving Amazon vehicles. These are presented to demonstrate that Amazon’s policies and business practices are unsafe, were implemented to avoid regulations that could impact their profits and allows them to hire unqualified drivers who are untrained and underpaid per industry standards.

Liability and Causation in Amazon Crash

In any personal injury accident, liability must be proved by the plaintiff by the standard of proof by a preponderance of the evidence, or that the defendant’s misconduct or negligence was more likely than not the cause of the accident.  In this case, the delivery driver had a duty to exercise ordinary care in operating his vehicle, which means to keep a cautious eye on traffic and to drive within the traffic laws.  Obviously, falling asleep at the wheel was a breach or violation of his duty of care toward the victim.

Amazon, as the driver’s employer, is held vicariously liable for any actions by its employees that lead to an accident.  But by showing that Amazon, as a commercial carrier in its own right, contributed to the accident through its flawed and dangerous business practices that have been shown to endanger the safety of others on the roadways, it can be held to a higher standard of care.  It can also result in substantially more compensation to a victim who suffered death or serious injuries as a result of these policies, not least because it has deep pockets.

Amazon is a major corporation that will retain teams of highly skilled and experienced defense lawyers who aggressively defend the company regardless of apparent fault.  To meet the defenses and stonewalling that these companies and their attorneys often throw up to discourage and frustrate plaintiffs, you need the services of a skilled, experienced, and resourceful car accident lawyer from Burns and Jain who has successfully handled lawsuits against major corporate defendants.

Damages in a car accident depend mainly on the nature and extent of the injuries suffered, and may include:

Damages are an essential element in any injury claim. You need an experienced car accident lawyer who can provide documentation and other support of damages so that you can be fully compensated.

Serious injuries often present difficult and complex issues of liability and damages regardless of how obvious liability or injuries may seem. Contact a veteran and resourceful car accident lawyer from the law office of Burns and Jain at (617) 250-8256 for a free consultation about your injury claim.