Earlier this summer, a Hopkinton, Massachusetts woman sustained serious injuries after being ejected from the sedan in which she was a passenger when it collided with a utility vehicle. The crash occurred in Wilford near 420 Fortune Boulevard around 5:30 p.m. According to witnesses, the sedan’s driver was speeding and overtaking multiple vehicles before crossing into oncoming traffic where it collided with the utility truck. 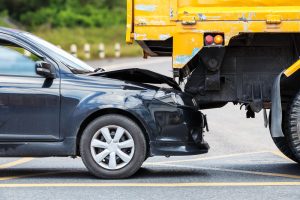 Drivers of both vehicles suffered moderate to minor injuries while the passenger was airlifted to Worcester Hospital where she was reported in serious condition. Police were investigating the accident and had assigned the case to accident reconstruction officers from the Central Massachusetts Law Enforcement Council. The Council is a non-profit organization with over 80 municipal law enforcement agencies that provide assistance to one another through a mutual aid agreement.

Liability and Compensation in Milford Accident

Liability for the above accident appears fairly clear based on eyewitness accounts of the sedan driver likely traveling over the posted speed limit, driving too fast for conditions and recklessly in passing and overtaking other vehicles before ending up in the oncoming lane of traffic. In this situation, the injured passenger could have a negligence claim against the driver for her injuries if she survives, or a wrongful death claim brought by the administrator of her estate if she does not.

The only impediment to her claim is that she may not have been wearing a seatbelt since she reportedly was ejected from her vehicle. Persons ejected from vehicles in motor vehicle accidents are at least three times more likely to suffer critical or fatal injuries. However, the injured woman could have been ejected due to a faulty or defective seatbelt. The car accident attorney for the claimant should have the restraints examined to determine if it did fail to secure the woman. It is also possible that the airbags in the sedan failed to deploy if this was a head-on collision and which might have kept the woman in her seat and prevented her from being ejected.

If either possibility is shown where the injured woman had been restrained—that the seat restraints failed, or the air bag failed to deploy—then the woman’s car accident attorney could bring a claim against the manufacturers of these safety devices.

A resourceful and experienced car accident attorney will consider all possible causes of a car accident. Not only are human factors examined such as the driver’s conduct, but the vehicles, their equipment and devices, weather, and the roadway itself are looked at to determine what role, if any, they played in the accident. In cases of serious injuries where medical expenses can be in the hundreds of thousands of dollars or more, and the injured party faces substantial loss of income or the capacity to earn due to a permanent injury, as well as a diminished quality of life, all possible sources of compensation must be explored.

Utility trucks are commercial vehicle and will generally have insurance limits in the millions. Car manufacturers and designers of seat belts and airbags also have resources that may be sufficient or at least can contribute to an injured party’s compensation if they are found to have some degree of responsibility.

Damages in car accident claims vary considerably depending on the nature and extent of the claimant’s injuries. Damages generally consist of:

Demonstrating and proving damages is an essential part of a car accident attorney’s task in representing any injured claimant.