A recent crash in the 100 block of Broadway in Lynn, Massachusetts resulted in a passenger being partially ejected from her vehicle. The badly injured individual had to be fully extricated from the car by the jaws of life before being airlifted to a Boston hospital. There were three other persons who sustained serious injuries according to police reports. No other information on the crash was reported. 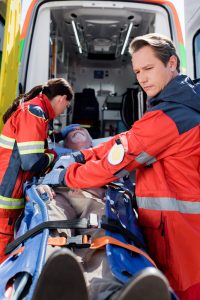 Passengers are often ejected from vehicles because they neglect to wear seatbelts. Wearing a seatbelt reduces the risk of serious injury by 45% and the risk of death by 50%. If you are ejected from a vehicle, you are 91 times more at risk of suffering a fatal injury. 91 times!  Since Massachusetts motorists rank near the bottom of seatbelt users nationwide, the chance of being ejected even in a relatively low speed impact is high in accidents where occupants are not securely fastened. In the case of the Lynn motorist, even being partially ejected meant that the passenger suffered life-threatening injuries by being trapped in the car and unable to be extricated except by extreme means.

Other than the culpable motorist, any of the other involved parties in the Lynn crash can present a claim for compensation against the responsible motorist. Even if an injured passenger was a relative of the responsible driver, a claim can still be prosecuted for damages against the driver regardless of the familial relationship.

It is possible that more than one motorist was responsible for the Lynn crash. Both motorists may have been speeding or driving recklessly. If there is a dispute over which motorist failed to stop for a red traffic signal or made an unsafe lane change or other negligent traffic maneuver, the injured passengers can still make a claim against both motorists who would have to sort out their own comparative responsibility or offer evidence of their innocence. Retaining an experienced Boston car accident attorney from Burns and Jain is essential in such cases.

If the culpable driver, or both of them if liability is split between them, lacked liability insurance, the injured passengers may bring an uninsured motorist (UM) claim through their own auto liability policy or one possessed by a household member that would cover them for injuries. UM coverage is mandatory in Massachusetts. If one party possessed liability insurance but the other did not, and damages were substantial, the injured party could bring a claim against the insured party and a separate claim against his/her own policy for UM coverage. The comparative degree of responsibility would have to be worked out.

Should an investigation show that the injured party who was partially ejected from her vehicle was not culpable but also was not wearing a seatbelt, then the defendant insured(s) could produce evidence or expert testimony that the person would not have suffered the degree or extent of her injuries had she been wearing her seatbelt. If proven, the finder of fact would assign a percentage of fault to that party that would lessen her compensation for damages by her own degree of fault. If her damages were $100,000 but her percentage of fault was at least 51%, Massachusetts law would bar her from recovering any compensation. If she was 40% at fault for his injuries, then she would collect only 60% of whatever compensation was awarded to her.

It is also conceivable that that party was wearing a seatbelt, but it failed to adequately secure her in her seat, and which contributed to the severity of her injuries. In such cases, your car accident attorney can bring a claim against the car manufacturer or whoever designed and/or manufactured the defective seat belt.

Compensation for multiple parties is limited to the coverage amounts. For instance, if coverage for the responsible insured party is $50,000/$100,000, then $100,000 is divided among the innocent injured parties but with no one party receiving more than $50,000.

Should the liability limits of the at-fault insured party be insufficient to compensate one of the parties, then that insured passenger could seek underinsured motorist (UIM) compensation from their own insurance company. However, UIM coverage above the minimal is optional in Massachusetts and must have been purchased. Once the liable party’s coverage limits are exhausted, then the injured party who has UIM coverage can pursue a claim. For example, the injured party must have received the entire $50,000 if the original or primary coverage were $50,000/$100,000 as in the above example before he or she could make a UIM claim.

Damages in any car accident depend on the nature and extent of the injuries, and the reasonableness of the medical care and expenses. Typical damages include:

Car accident injury claims often do present complicated issues of liability, insurance coverage, and damages, and are aggressively defended by insurance adjusters. By retaining a knowledgeable and highly experienced car accident lawyer from the law offices of Burns and Jain, you will have a greater opportunity to obtain the compensation to which you are entitled. Call our office today at (617) 286-3594 for a free, in-depth discussion of your car accident injury claim.