A New Hampshire court recently denied bond to a 24-year old West Springfield, Massachusetts man accused of running down and killing 7 motorcyclists on Route 2 in Randolph, New Hampshire on June 21, 2019. The man, Volodymyr Zhukovskyy, is reportedly a citizen of Ukraine. Prosecutors had argued that he presented a clear danger to the public given his documented drug use, and constituted an extreme flight risk in that he was likely to return to his country of origin, Ukraine, where he still has family. Zhukovskyy’s status is that of a permanent U.S. resident but he remains a Ukrainian national and is not a citizen. Accordingly, immigration officials were poised to deport him once criminal proceedings were concluded. It was not clear if Zhukovskyy would first have to serve out his sentence, if convicted, before being subject to deportation. 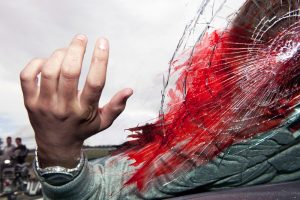 Lawyers for Ms. Zhukovskyy contended that there were flaws in the prosecution’s case, including police
having extracting testimony from Zhukovskyy shortly after his arrest after he had told detectives that he
was not feeling well and did not want to continue further questioning. He had been given his Miranda
warnings and had waived them before talking. Prosecutors and police contend that Zhukovskyy was
ambiguous about wanting to terminate the questioning and only said so because of the drugs he had taken. Attorneys were awaiting a ruling on the admissibility of statements he made after wishing to terminate questioning.

Defense lawyers also contended that findings from an accident reconstruction expert were enough to question the role of Zhukovskyy in causing the accident.

The circumstances of the accident are horrific. 8 members of the Jarhead Motorcycle Club were heading east on Route 2 while Zhukovskyy, who was in a pickup truck, was towing a flatbed trailer for the Westfield Transport Company, now a defunct entity, in the westbound lane. Zhukovskyy apparently became distracted and caused his truck to drift over the centerline where it struck one of the riders before continuing to plow into the others. Only one of the motorcyclists survived the incident.

Zhukovskyy allegedly later admitted to police that he had ingested Fentanyl and cocaine before driving and was unaware that he had struck anyone. After the accident, Zhukovskyy had returned home where he admitted to inhaling several bags of heroin.

Zhukovskyy has an extensive record of extreme drug use and prior interactions with police where he was once found nearly unresponsive in a parking lot and had to be administered Narcan to recover from an apparent drug overdose. He also had an arrest for a DUI on May 11, 2019 in Connecticut. For some reason, the Massachusetts RMV, who were notified of Zhukovskyy’s refusal to submit to a BAC test in the Connecticut matter, neglected to suspend his license, which is automatic in test refusal cases.

Does a Criminal Conviction Impact a Civil Claim for Damages?

While the facts and circumstances of the above tragedy may well convict the defendant and result in his spending years in prison and probable deportation, how does it affect any civil action brought by the
decedents’ families or the executors of their estates?

The standard of proof in a civil case like a car accident claim is that of preponderance of the evidence. It
is much higher in a criminal proceeding where the state must prove guilt by the standard of beyond a
reasonable doubt. If a defendant is convicted of a crime, then it would be much easier to prove negligence in an injury claim by the lesser standard of proof.

If a defendant is found guilty by a judge or jury after a trial, the conviction can serve as evidence in a civil case. But if the defendant enters a plea of No Contest, then he has not admitted to guilt although his plea is considered one of guilt and he has admitted to the facts of the case. As a result, his plea cannot be used in a civil matter to prove negligence.

Accordingly, a car accident lawyer will still have to prove that the facts of the accident are sufficient to prove negligence. In the case above, Zhukovskyy will likely be found negligent in causing the deaths of the 7 motorcyclists and causing the injuries to the surviving biker. Because of evidence of his drug use by blood tests, admissions made to police even before he allegedly tried to cease questioning by police, and his leaving the scene of a fatal accident while professing to not have realized there was an accident, punitive damages are likely to be sought.

Punitive damages are personal and are not covered by insurance. The plaintiffs would have to obtain a
judgment against the defendant and attempt to seize any personal assets. It is probable that the defendant in this case had few assets.

The defendant was also apparently driving for his employer, in which case the employer can be held
culpable as well, especially for hiring someone with a history of driving while under the influence of
drugs, and of extensive use of dangerous narcotics including Fentanyl, cocaine and Fentanyl of which the
employer should have been aware. Since Zhukovskyy was driving in the course of his employment, the
employer’s insurer should provide coverage in any injury or wrongful death claims. To date, there have
been no reports of any wrongful death or injury claims being presented or filed.

It is unknown what insurance coverage is available from the insurer for Westfield Transport, the
defendant’s employer. It is unlikely that the defendant even possessed liability insurance because of his
prior DUI matter that occurred less than one month before the fatal accident. However, commercial
policies for businesses are usually in the six figures range.

In wrongful death claims, the administrator or executor of the decedent’s estate can bring an action on
behalf of the immediate family members. Damages may include:

Holding parties accountable for their wrongful conduct and proving damages are often difficult, andshould only be handled by a car accident lawyer with extensive experience and a proven record of
success.

Be sure your claim is handled by a highly experienced and successful car accident lawyer from Burns and Jain. Call our office at (617) 250-8256 for a free and comprehensive evaluation of your injury or wrongful death claim.