In early August, a 55-year old woman in Brockton, Massachusetts was crossing Centre Street near the entrance to Brockton Hospital around 9:00 p.m. when she was struck and killed by a man driving a Chevy Tahoe. The suspect left the scene only to turn himself in to police about an hour later. 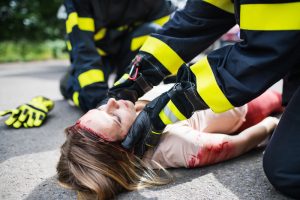 Police at the scene had obtained witness statements and reviewed surveillance footage that led police to identify the vehicle. After turning himself in, the suspect claimed he thought he had struck a traffic cone as his reason for not remaining at the scene. When he later discovered that the object he struck was a person, he inexplicably moved his car to a parking lot before turning himself in.

The suspect has been arraigned and charged with leaving the scene of a personal injury or fatal accident. He was being held on $2500 bail with the condition that if he met bail, he would be required to wear a GPS monitor on his ankle and to not contact the victim’s family. Leaving the scene of a fatal accident is a felony in Massachusetts that carries a minimum jail sentence of 2.5 years and a maximum of 10-years.

Liability in a Hit-and-Run Accident

A common defense in a hit-and-run accident is that the defendant did not realize he had struck someone, or he would not have left the scene. The surveillance footage in the Brockton case would have to be examined to see the point in the street where the victim was struck, and to analyze the defendant’s conduct in the moments after the impact. If it appeared that the defendant realized he had struck someone, by speeding away from the site, or that there is no reasonable way that anyone could not have noticed that a human being had been struck, then other charges could be brought. This might include homicide by negligent operation that can be charged as either a misdemeanor or felony, or manslaughter by motor vehicle that has a minimum jail sentence of 5-years and up to 20-years in prison. A homicide in a motor vehicle accident results in a 15-year suspension of your driver’s license.

Regarding civil liability, the defendant could allege that the street was poorly illuminated, which could provide the victim’s family another possible party—the city—as at least partially responsible for the accident.

In most personal injury or wrongful death actions, the suspected defendant is accused of negligence. In this case, one can allege that the defendant was negligent in not having observed the victim crossing the street, whether in a crosswalk or not, and not realizing that he had struck someone? In this case, it is highly probable that a motorist exercising ordinary care when driving in an illuminated area, since this was adjacent to a hospital, would have seen a person walking across the street, and realized that he had struck a person and not a traffic cone.

There are a variety of reasons for why people flee the scene of an accident:

The Brockton man did turn himself in either out of a realization of what had happened, or that he was resigned to the fact that he would be eventually identified and arrested.

The family of the victim in this tragedy has recourse against the defendant. In Massachusetts, the executor or administrator for the decedent’s estate can bring a wrongful death claim on behalf of the immediate family members.

If the Brockton defendant possessed liability insurance, then the policy limits would be exhausted at least for the wrongful death claim. The minimum policy limits in Massachusetts are $20,000/$40,000. This means the most any one claimant can recover under a minimal policy is $20,000. If there are multiple claimants, then they would have to divide $40,000 with no one claimant recovering more than $20,000.  Most motorists have policies with higher limits, but few are over $100,000/$300,000.

Should the defendant be uninsured, then the executor would have to seek compensation under the victim’s uninsured (UM) policy. These claims proceed in a similar fashion as any third-party claim with the claimant having to prove liability and damages, except that the final resolution if not settled is by binding arbitration instead of a court or jury trial.

An experienced personal injury lawyer will always investigate a serious or fatal accident claim to determine if other parties played some part in the accident. In the Brockton accident, an expert might be retained to examine the accident site for possible liability by the municipality for failing to properly illuminate the area or to install safety measures to guard against pedestrian accidents, especially if the area has a high incidence of such accidents.

The conduct of persons who flee a fatal car accident or who try to cover up their involvement might be construed as grossly negligent, but this is a question for the trier-of-fact. However, a punitive damages award is not covered by insurance so that the defendant must have a judgement against them before their assets, if any, can be seized.

Serious injuries or death from a hit-and-run and other deadly car accidents can cause families to suffer life-long consequences. An experienced car accident lawyer from Burns and Jain can discuss the process of a wrongful death claim and what you can do to maximize compensation for the loss of a loved one. Call Burns and Jain at (617) 286-3594 for a free consultation about your injury or wrongful death claim.