In early July, a 21-year old Plymouth man suffered fatal injuries in a multi-car crash on the Massachusetts Turnpike in Westfield. The accident occurred around 3:00 p.m. when three vehicles initially collided in the westbound lanes at the 39.6-mile marker, not far from the Exit 3 turnoff. None of the occupants at this point were seriously injured until a 2003 Peterbilt heavy tow truck approaching the crash scene rear-ended one of the stopped vehicles, a 2005 Nissan Altima driven by the unfortunate 21-year old Plymouth man, who was pronounced dead at the scene. 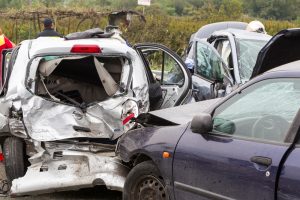 Who is at Fault in This Car Accident

In a multi-car collision, fault is often difficult to ascertain. This is especially true in chain reaction rear-end accidents that sometimes involve dozens of vehicles that occur in heavy fog on interstates or freeways where it can be nearly impossible to determine which crash caused injuries to multiple individuals.

In the Westfield accident, the facts only indicate that a three-car collision occurred where no apparent injuries were at first sustained until the arrival of the tow truck. It is not clear at what point in time the tow truck appeared on the scene that eventually collided with the Nissan and caused the man’s death. However, could the tow truck driver have avoided the collision at all? Or was whoever caused the initial collision among the three vehicles ultimately responsible for the driver’s death, or was that driver’s negligence superseded by the negligent conduct of the tow truck driver? Also, what if the decedent’s own negligent driving was the cause of the initial accident or at least partially the cause?

It is possible that the tow truck driver had no time to avoid the collision if the initial three-car accident had occurred seconds before the tow truck struck the Nissan. In this case, the vehicle accident lawyers would have to determine which of the other three motorists were at fault. This may be difficult since the Nissan driver is deceased, and the surviving drivers could all blame the deceased driver. Accident reconstruction experts may have to examine the traffic collision report, review witness accounts, and examine the property damage and site to arrive at some definitive conclusion.  In all fatalities, the Massachusetts State Police investigate and undertake a thorough reconstruction report.  It is also possible that more than one party was at fault.

If the Decedent was Not at Fault

If the decedent driver was not at fault, and the surviving motorists are blaming each other, the burden shifts to them to work out liability. Normally in a negligence case the plaintiff or injured party has the burden of proving that another party was liable. But if there are multiple parties at fault and the plaintiff is blameless, then the burden shifts to the defendants who now must show that they were not negligent or that another party is to blame.

The vehicle accident lawyer for the decedent’s estate or administrator can demonstrate a prima facie case of negligence, which then forces those parties to either apportion fault among themselves or determine which of them caused the accident. A prima facie case is proven when:

The tow truck driver might also be found partially or even wholly at fault if the evidence shows that he had or should have had sufficient time to avoid colliding with the stopped Nissan but that he failed to do so because he was speeding, travelling too close, was distracted, failed to brake in time if at all, or neglected to take other evasive action that a person exercising ordinary care could have done.

A final scenario is where more than one defendant is found to be at fault. The parties themselves can apportion fault or leave it to a jury or judge as the trier-of-fact to determine their respective proportion of fault.

If the Decedent Was at Fault

The evidence and testimony from witnesses could establish that the decedent initially caused the three-car accident. If so, and the tow truck driver is not found negligent at all, then the decedent’s family has no wrongful death claim.

But if the decedent was determined to be partially at fault, then his degree of comparative liability would be deducted from the valuation of damages or from a money verdict. For instance, if the decedent’s damages or a jury verdict is $1,000,000, but his percentage of liability is 40%, then the net reward is $600,000. Massachusetts is a comparative fault state where a plaintiff must show that the defendant(s) degree of fault was at least 51%. If the decedent was found to be 50% or more at fault, then his estate or administrator cannot maintain a wrongful death claim.

In cases where a liable party has low or insufficient auto liability limits, then the plaintiff can look to his/her own auto policy for underinsured (UIM) compensation. UIM coverage is not mandatory in Massachusetts and you must opt to purchase it. Usually, it is in the same amount as your liability coverage. If you have $100,000/$300,000 liability, then your UIM is usually $100,000.

If one party or more parties are found liable for the Westfield fatal accident, but their combined liability limits are less than the UIM limits of the decedent’s policy, then the executor of the decedent’s estate can seek additional compensation under the decedent’s UIM policy. For example, if the one party at fault had a minimal policy of $25,000, or two defendants had combined limits of $50,000, then the plaintiff could seek to use the UIM coverage limits in his own policy so long as it exceeded $50,000. In this case, if the decedent had $100,000 in UIM coverage, the plaintiff could receive no more than $50,000, since the plaintiff had already received and exhausted the defendants’ limits of $50,000.

If another party is held responsible for the fatal car accident, then the administrator for the decedent’s estate can bring a wrongful death action on behalf of the immediate family members. Damages may include:

Wrongful death claims can involve complex issues of liability and damages that an experienced vehicle accident lawyer can handle. Finding the responsible parties and pursuing the claim against them can be challenging by itself.

Retain a Vehicle Accident Lawyer from Burns and Jain

Although car accident claims are common, finding the responsible parties and holding them accountable can be difficult. Call one of our highly experienced car accident lawyers from the Burns and Jain Law Office at (617) 227-7423 for a free and comprehensive consultation about your injury or wrongful death claim.