It is generally assumed that the best or safest place to be in a car accident is the back seat. The most serious accidents are head-on collisions followed by T-bone collisions. If you are restrained in the back seat during these collisions, the general belief is that you were likely spared serious or fatal injuries merely because of the distance between the back-seat passenger and the impact location. 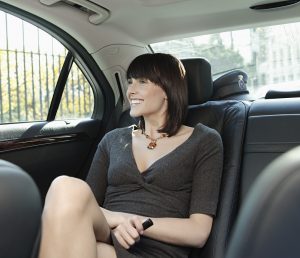 However, that assumption has been challenged recently by new vehicle safety technology whereby any position in the car is just as safe so long as the safety technology is available and functioning in you vehicle. New seatbelt sensors called pre-tensioners and load limits can automatically tense up when sensors detect that a collision is imminent but can also ease up if the wearer’s body is so tightly ensconced that it could harm the person. This technology was formerly available to front seat passengers only. The National Highway Traffic Safety Administration (NHTSA) recommends that if such technology is lacking in your car, that persons aged 55 and older sit in the front seat. Older persons have bones that are more fragile and vulnerable to serious injuries from a seat belt that lacks this latest technology. However, children under the age of 13 are safer in the back seat, although researchers could only state in a general sense that their injury patterns and mechanisms are different from older adults, and that the research supports that they are better off in the back seat.

Research conducted by the Insurance Institute for Highway Safety (IIHS) and the Children’s Hospital of Philadelphia did find that in a study of 117 rear-seated occupants age 6 to 92 who were killed or seriously injured in front end collisions, there was significant seat belt trauma to their chests though the seat belts met the minimum federal safety standards. Sensors in these cases might have prevented the chest trauma that led to at least some of the injuries or fatalities, although the catastrophic injuries and deaths prevented by wearing a seat belt in a serious accident far outweighs the trauma inflicted by the seat belt.

Researchers and vehicle safety advocates are urging that front seat safety technology be included for back seat passengers, especially with the increasing public reliance on ride-hailing services such as Lyft and Uber with most passengers sitting in the back. Researchers expressed confidence that a back-seat crash test will become routine by 2022 so that consumers will be able to see which vehicles have the safety technology for rear seat passengers.

The technology is available in a number of new vehicle models. Ford designers found that a flaw in the technology may allow the passenger’s head to move too far forward if the belt loosens up in response to the body’s tautness against the belt. As a result, its design allowed the belt to inflate so that it spreads the pressure over a wider area. Consumers, however, were not so enthusiastic since the feature costs extra, and the belt was much wider than a conventional belt as well as requiring a certain degree of dexterity in using it. It has now introduced the pre-tensioner and load limits belts in its newer models as standard equipment.

Wearing a seat belt reduces your risk of a fatal injury by 45% and the risk of a serious, life-altering injury by 50%. Without a seat belt, you are also 30 times more prone to being ejected from a vehicle. Approximately 75% of persons ejected from a vehicle in an accident suffer fatal injuries. You are also more vulnerable to being thrown inside the car against the seat, a sharp object, or another passenger. In the vast majority of fatal car accidents, the victims were not wearing a seat belt.

This is an important statistic for Massachusetts drivers and passengers. Our office has long advocated that our legislature make seat belt violations a primary violation so that police can stop motorists who are not buckled up. Massachusetts drivers have historically been among the worst users of seat belts in the nation. Although our motorists now use belts 80% of the time, a rise from 73.8% in 2017, it remains far below the national average of 90%.

You are entitled to damages if your car accident was caused by the negligence of another motorist or by the driver of the car in which you were a passenger. Damages typically include:

If you were not wearing a seatbelt, your damages could be reduced if expert testimony or evidence is produced that shows that wearing a seat belt could have prevented the injury or minimized its severity. For instance, if you were ejected from the vehicle and suffered fractured limbs or head trauma or were thrown into the seat in front of you and suffered an eye injury, a jury or finder-of-fact could determine that these injuries were the result of your own comparative negligence. If so, your damages could be reduced by the percentage of your own fault.

In any type of car accident where you or a loved one has suffered injuries because of the negligent driving of another motorist, promptly retain an experienced car accident lawyer. Even if you were not wearing a seat belt, you can still recover compensation but only if you retain an attorney from Burns and Jain who can see that your injuries are adequately compensated. There are many issues in a personal injury claim that require skilled legal representation to get you the compensation that you deserve. Call us today at (617) 227-7423 for a free consultation about your injury claim.