A recent lawsuit filing in Hampden County Superior Court brought back memories of the deadly and incomprehensible tragedy this past June in Randolph, New Hampshire where 7 motorcyclists were killed. A young driver in a pickup truck towing a trailer suddenly crossed into the opposite lane of traffic and mowed down the innocent motorcycle riders. None of the first responders or police at the scene could recall an incident or carnage of this magnitude in a single motor vehicle incident. The driver was from Springfield, Massachusetts and had a Massachusetts driver’s license at the time of the incident. 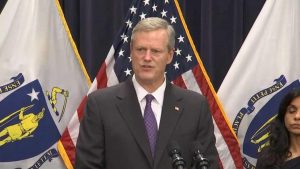 The motorcycle accident lawyer for a survivor of the accident who suffered multiple fractures and had to undergo surgery brought the lawsuit in which he has claimed over $500,000 in damages. The suit named the pickup truck driver as defendant along with the driver’s employer alleging negligent hiring. The attorney for the injured rider told reporters that he was also contemplating adding the Massachusetts Registry of Motor Vehicles (RMV) as a defendant.

At a press conference in July, the governor, lieutenant governor, and director of public transportation startled reporters when they announced that a backlog of thousands of out-of-state traffic violations that had lain dormant in boxes for as long as 8-years was finally being handled and was resulting in well over 1,000 license suspension affecting hundreds of Massachusetts drivers. This failure of public responsibility lead to the resignation of the RMV director.

Governor Baker stated that the backlog was a public safety issue since drivers who had been convicted in out-of-state courts for such serious violations as vehicular homicide, DUI, and refusal to take a chemical test did not have their Massachusetts licenses suspended or revoked and continued to drive. One of these drivers was the one who drove the pickup truck that allegedly killed the 7 motorcyclists in Randolph. He had been arrested for drunk driving in Connecticut one month before the deadly crash, but his license was still valid. If the courts allow the RMV to be included as a defendant, you can be assured that a motorcycle accident lawyer and car accident lawyers will consider naming the RMV as a defendant if their clients were injured or killed by a motorist whose license should have been suspended by the RMV by an earlier out-of-state violation.

It is not entirely clear what caused the Randolph accident. The lawsuit alleged excessive and failure to control the truck as factors in the accident but only the driver may know the answers. Motorcycle riders are at the mercy of other motor vehicles as well as poor road conditions, faulty tires or other defective motorcycle equipment, and weather. Bikes also present a much smaller image to other motorists who often fail to notice their presence or misjudge their speed.

Common factors in motorcycle accidents are:

You can avoid accidents if a rider by taking a rider safety course even if you have been riding for years. Always drive defensively, wear a helmet and protective clothing, and never drink and drive. Assume other drivers do not see you, avoid speeding, and be wary of getting into a driver’s blind spot.

The families of the 7 motorcycle riders killed in the Randolph accident could bring a lawsuit in Massachusetts against the driver and his employer and possibly the RMV. In our state, wrongful death claims are brought by the administrator for the decedent’s estate. Administrators are named in wills, but if the decedent died intestate, or without a will, the surviving family members could decide on one or even two family members to serve. An attorney can also serve as an administrator.

Damages in a wrongful death claim include:

Motorcycle accidents often result in life-altering injuries as well as challenging and complex issues that only an experienced and resourceful motorcycle accident lawyer should handle. Call us at (617) 227-7423 for a free consultation about your injury claim.