A tragic rollover accident occurred in early June that took the life of a 16-year old who had just completed his junior year in high school. The young driver had been traveling on I-93 in Andover, Massachusetts, around 5:00 p.m. when his 2018 Mitsubishi SUV rolled over and crashed into a signpost. He later succumbed to his injuries. 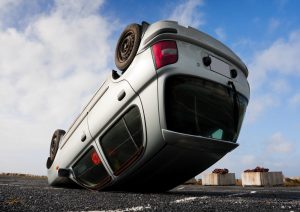 Police had not released any details of what led to the crash when this was first reported. SUVs are prone to rollover accidents because of their high center of gravity making them more top-heavy. According to Consumer Reports, rollovers in these vehicles are not the result of sudden steering maneuvers but can be caused by the vehicle hitting something in the roadway such as a curb, pothole, or soft shoulder. However, not all rollovers are caused in this manner. Researchers also assert that tight tire gripping allows excessive sideway forces to accumulate until the vehicle flips over. Sideways forces can develop when the SUV rounds a curve, which shifts the center of gravity to one side, significantly affecting the vehicle’s balance.

Consumer Reports also blames after-market pick-up or performance tires that provide more lateral grip that increases the risk of a rollover during an emergency maneuver. It is not known if the youth’s SUV was equipped with these tires, or if the young driver was seat belted. Other unknowns are whether the young driver had been distracted while driving, which may have led to sharp braking or swerving to avoid an object in the road, or if the SUV had struck something, or the driver was driving too fast while executing a sharp turn.

It would be wrong to make any conclusions about what led to the rollover accident before police are able to reconstruct the accident, if possible. If the youth had been texting and driving, police can usually ascertain that by examining his cell phone to see if any messages had been texted or sent or if he was viewing a video or engaged on some other app on his phone.

Distracted driving has taken its place alongside DUI as a prime factor in fatal accidents among young drivers. This behavior involves any action that takes your eyes off the road, hands off the wheel, or directs your mind toward something other than driving. Although this can include eating, grooming, changing the radio station, talking to passengers, or gazing out the window, the activity that invariably leads to an accident nearly always involves a smartphone. Using a cell phone to text, to watch a video, or to talk combines all three distractions regarding visual, manual, and cognitive absence from the task of driving. Safety advocates often point out that the average time to send or read a text is 5 seconds. If your vehicle is traveling at 55 miles per hour, this is equivalent to driving about 100 yards with your eyes closed, more than enough time for your car to swerve out of its lane or for you to miss a hazardous condition.

Nearly 25% of all car accidents involve distracted driving, which is responsible for 58% of teenage car crashes. Another sobering fact is that 16 to 19-year old drivers are 3 times more likely to be involved in a fatal car accident than any other age group. Of course, this group is far less experienced than any other in driving but are also highly likely to have smartphones and to use social media or apps on their phone while driving. Eating, drinking, and applying makeup are the other aspects of distracted driving behind smartphone use that are factors in teen accidents.

Police did not report if the teen driver had been wearing his seat belt. Unfortunately, Massachusetts drivers are notoriously poor users of seat belts. One reason is that seat belt usage is still a secondary violation in our state, meaning that police can only cite you for non-use if you were first stopped for some other traffic violation. It only carries a $25 fine. Although we have increased our usage to 80% this past year from levels well below that, the national average is 90%.

75% of passengers or drivers who have been ejected from a vehicle in an accident, which is likely in a rollover from not wearing a seatbelt, suffer fatal injuries. Even if you are not ejected, failure to be restrained can cause you to be thrown within the vehicle, and to strike a window, object in the car, or another occupant. Seat belts reduce the incidence of a fatal car accident by 45% and of severe injuries by 50%.

Liability of Other Parties

Without expert reconstruction of the rollover accident that claimed the life of the 16-year old, it is difficult to determine if some other party was responsible in some measure for the rollover. In some cases, faulty tires can be a factor as well as a defect in the steering or braking system, an object in the roadway that fell off a truck and which can be traced to the owner, or even poor roadway design. Should the investigation reveal any of these possibilities, then a Massachusetts car accident lawyer can present a claim that may bring substantial compensation to the family of the decedent.

Also, SUVs are responsible for about 36% of rollover accidents. It is possible that the SUV has a design flaw or defect or manufacturing defect that caused the vehicle to be unreasonably dangerous. If so, the family of the deceased driver may be able to assert liability against the SUV manufacturer for producing a vehicle that failed to perform safely when used in a foreseeable or intended manner. These are product liability claims that often involve protracted litigation and requires the skills and resources of highly experienced car accident lawyers.

If another party can be held responsible for the fatal car accident, then the administrator for the decedent’s estate can bring a wrongful death action on behalf of the immediate family members. Damages may include:

Wrongful death claims can involve complex issues of liability and damages that an experienced car accident lawyer can handle. Finding the responsible parties and pursuing the claim against them can be challenging by itself.

Car accident injury claims may be all too common but that does not mean they are easily resolved with adequate compensation paid out to deserving parties. Too often, injury victims who handle their own claims recover far less compensation than those who are represented by skilled and knowledgeable car accident lawyers, even accounting for legal fees. Call a car accident lawyer at Burns and Jain at (617) 227-7423 for a free consultation about your injury claim.