Uber is one of two highly recognized ridesharing or ride-hailing services that is ubiquitous in most cities and larger towns throughout the U.S. and abroad. Each state requires these services to maintain a one-million-dollar liability policy in the event of an accident where the Uber or Lyft app is activated, and a passenger is on-board. These policies provide substantial coverage for the drivers if they cause an accident or they or their passengers are injured while being transported. But what if a third party asserts that the Uber passenger was at least partially at fault for their injuries? Would Uber insurance cover the passenger? 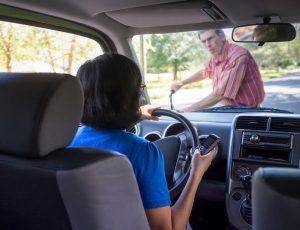 This unique and likely unforeseen scenario occurred in 2015 when a Framingham man riding in an Uber was let off after his driver stopped in a bike lane on Commonwealth Avenue. When the passenger opened his door on the curb side, an approaching bicyclist in the bike lane was pinned between the Uber vehicle and a parked car, causing him unspecified injuries though his medical costs were reportedly around $4,000 which satisfies the no-fault threshold for bringing a third party injury claim. The cyclist has since sued both the Uber driver and the passenger.

Uber has consented to defending the driver as a covered insured under its policy, but has denied Uber insurance coverage to the passenger, arguing that his act of opening a car door did not “constitute use of a covered automobile” and thus was not an insured. The passenger, who had no vehicle or insurance to cover him under such circumstances, risks having his personal assets seized if he should be found liable.

Is the Passenger Covered by Uber?

The first issue is whether the passenger should be covered by Uber at all. The company’s argument that opening a car door does not “constitute use of a covered auto” is irresponsible and one that legal experts generally reject since the cyclist was injured by the car door opening into his path of travel. There are numerous court cases finding coverage or use of a covered auto even if the vehicle was not moving or was parked, or when a person was being removed from a car when struck. All these cases involved some nexus or connection to the vehicle when the accident occurred. Given that the driver had opened his car door into the bicyclist, Uber should be hard pressed to deny coverage to the driver on this basis. Nevertheless, the passenger would have to retain an attorney to force Uber to cover his potential liability by obtaining a court ruling in his favor. However, an attorney for Uber in this case is reportedly negotiating a settlement with the cyclist that would not involve any contribution by the passenger. Uber may be doing this to prevent a court ruling against its position that would affect future cases.

Liability of Driver and Passenger

It is unlawful to drive in a bike lane unless making a turn or to park in one at all, however Massachusetts did not make this a violation until 2017, which was two years after the above accident. Although the Uber driver’s action in parking in the bike lane was not a traffic violation at the time, it could be construed as negligence since he was obstructing the flow of traffic that includes bicycles if not putting bicyclists at risk. The Uber driver also left the passenger no choice but to exit at this location, though the passenger might have suggested to the driver to pull into any vacant parking spot, to the curb, or to simply put on his emergency flashers in the roadway so he could exit.

It is also the responsibility of the driver and passenger to look before opening the car door if doing so would likely present a danger to passing bicyclists. This violation or act is referred to as “dooring” and is specifically addressed in General Laws Chapter 90, Section 14: “No person shall open a door on a motor vehicle unless it is reasonably safe to do so without interfering with the movement of other traffic including bicyclists…”

Before pulling over into and parking or stopping in the bike lane, the Uber driver should have ensured that the lane was clear of bicyclists. Apparently, it was clear when he did so though in the exercise of due care, he should have seen the approaching cyclist or at least have warned the passenger to look behind him before opening the door. Similarly, the passenger should also have looked behind him or should have known that the car was in a bike lane and that an approaching bicycle was a distinct possibility.

Uber and Free Rides for Patients

In a twist on Uber or Lyft liability under unusual circumstances, legal experts are warning employers who offer free ride-hailing rides for its employees for medical visits as a benefit of potential problems. One expert envisioned a scenario where an Uber driver is advised by someone accompanying the passenger that the individual, who is an employee receiving a free ride to a clinic, has a particular medical condition that requires him to lie down in the back. Other than posing a safety risk to the passenger who likely would not be in a seat belt and risking severe injury in a collision, the main issue here is the possible disclosure of the patient’s medical condition, especially if the employer is told that their employee requires some accommodation when placed in an Uber or Lyft. The expert cautioned that this disclosure could put the employer at risk since the employer is now aware of the employee’s medical condition that could adversely affect the employer-employee relationship. If the employee is terminated at some point, the disclosure could be used against the employer as unlawful medical discrimination.

There is further risk to the employer if the driver should assault the employee or if an accident ensues. Although Uber or Lyft are tasked for vetting drivers, there remains the possibility that the employer could be still be held partially at fault for the negligent conduct of the driver that it retained.

The bicyclist in the above accident is entitled to damages since his accident was caused by the negligence of another motorist or by the passenger. Damages typically include:

Whether your injury claim involves Uber insurance issues, a bicycle or pedestrian accident, or any other car accident, call the car accident lawyers at Burns and Jain. Many injury claims have issues regarding liability, pre-existing injuries, comparative negligence, damages, or may include other parties whose responsibility is not so readily apparent. Our attorneys have decades of experience in obtaining the compensation our clients deserve. Call us at (617) 227-7423 for a free consultation about your injury claim.