The newest reports on pedestrian accidents from the Governor’s Highway Safety Association are a little misleading at first glance. Because of increased safety measures, such as traffic calming, installation of bike lanes, placing flashing lights on crosswalks, constructing safety islands, and decreasing speeds in urban areas, 23 states have reported a decline in pedestrian accidents and fatalities since 2017. There were 6 states that had double-digit declines and 3 had consecutive years of decreased pedestrian incidents. Our sister state, New Hampshire, is apparently the safest state for pedestrians having reported just a single fatality in 2018 representing an astounding 80% drop in pedestrian fatalities. 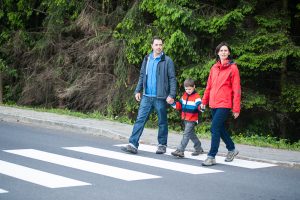 However, the story is quite different from the overall or national picture. In 2018, there were 6,277 pedestrian fatalities in the nation, which was the highest figure in 3 decades. As a result, about 16% of all traffic fatalities were pedestrians in 2018, compared to 12% in 2009.

What accounts for the overall trend that threatens pedestrian safety? Some point to the increase in pedestrian traffic with about 4% more people walking to work since 2007. Some communities are focused on building residences near offices or public transit to take more cars off the road and are building more apartments and penthouses in downtown areas. There has also been an increase in bicycle use for transportation to work as well as for recreation and health. Of course, as the population grows, so do the number of pedestrians and vehicles.

However, most pedestrian accidents occur at night and on local roads away from city traffic and intersections with 90% of the increase occurring in these areas. This suggests poor lighting or none at all on these roads, and pedestrians who take it for granted that they are far enough off the roadway when walking or that motorists will see them. Also, there are more fatigued drivers on the road at night.

Further, motorists tend to speed on local roads and rightly assume that there is little or no police presence in these areas. Drivers may also believe they can safely travel after drinking if the risk of being stopped and charged with DUI is slight.

Many of the pedestrian fatalities involve encounters with an SUV. These vehicles have higher front-end profiles and consequently, according to USA Today, are more than twice as likely to kill a pedestrian than a regular passenger vehicle. Since 2014, SUVs have accounted for 60% of all vehicle sales so their presence on the roadways has substantially increased in recent years.

Along with fatigued, drunk and drugged driving is a modern device that is plaguing American highways and local roads—the smartphone. Despite legislators having finally recognized the danger of texting and driving and passing stricter laws banning all hand-held use of phones, drivers continue to text or use their smartphones. This includes their use while mounted or with a blue-tooth function that allows hands-free conversations.

From 2010 to 2017, smartphone use increased by 5-times. The American Automobile Association (AAA) reported that the number of drivers using a cell phone increased 46% since 2013. In a survey conducted by AAA, 49% of drivers said they use a smartphone while driving and 35% said they text, despite the ban. Experts say that you are 4 times more likely to be in an accident if using a phone at all, and 8 times more likely if you are texting and driving.

While increasing police presence in rural and certain local areas may not be possible due to strained resources or other reasons, the driving public needs constant reminders to look out for pedestrians on our roads. Slowing down, refraining from drinking and drug use, not using a smartphone, and being more cautious in dark areas are commonsense ways to avoid tragedies.

If a loved one succumbed to injuries in a pedestrian accident, the administrator for the decedent’s estate can bring a wrongful death action against the responsible motorist and any other person or entity that may be found at-fault. Damages in these claims typically include:

If you or a loved one sustained injuries or was killed in a pedestrian accident, you will need the skill and knowledge of a veteran pedestrian accident lawyer from The Law office of Burns and Jain. Call us at (617) 227-7423 to schedule a free consultation about your injury claim.