In April of this year, a grad student at UMass-Amherst was killed by a motorist while apparently in a crosswalk at North Pleasant Street near the Crestview Apartments. It occurred around 10:40 p.m. The motorist did stop at the scene and was cooperative with police. No citations were issued at the time and police did not indicate how the accident occurred or if any one party, or both, were at fault in some way. No witnesses to the accident were identified. Police did say that accident reconstruction experts were being used to determine how the accident occurred. 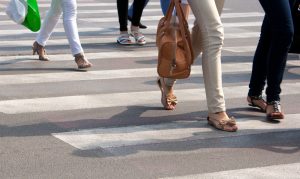 In cases like this, police have to rely on the statements given by the motorist who may be the sole witness. But the family of the decedent may still be able to bring a wrongful death claim by way of the administrator of the decedent’s estate against the motorist and perhaps other entities.

Determining Liability in a Pedestrian Accident by Massachusetts Lawyers

The fact that police had not cited the motorist is not dispositive of the matter. It is still possible that an experienced pedestrian accident lawyer can point to available evidence at the scene and the facts as given by the motorist to demonstrate liability.

Where the decedent was found in the roadway can show whether he was in the crosswalk or not when struck. Every motorist has a legal duty to exercise reasonable or ordinary care when driving, which includes obeying all traffic laws. When approaching a crosswalk, the motorist should be aware of a pedestrian in the crosswalk who has the right of way. According to Massachusetts law, the driver must stop if the pedestrian is within the path of the motorist or at least within 10-feet of the mid-point of the intersection. General Law, chapter 89, section 11. If the decedent was found in the noted areas within the crosswalk or reconstruction experts are able to place him there if the accident had propelled him to outside the crosswalk lines, then a finder-of-fact could conclude that the motorist violated this statute.

A reasonable argument might have been advanced by the motorist that he had not seen the pedestrian, that he was walking outside the crosswalk, or that he failed to see the configurations of the crosswalk. The accident occurred around 10:30 pm. in an apparently poorly lit or non- illuminated area and during a dreary, rainy or foggy evening. A photo of the crosswalk in the news report of the tragedy shows it to be barely visible, suggesting it had not been re-painted for quite some time.

Streets are maintained by municipalities and have a duty to the public to keep them serviced and safe. An investigation by a pedestrian accident lawyer might reveal that other pedestrian accidents have occurred at this intersection in the past few years and should have been on notice of its hazardous nature. Further, the failure to render the crosswalk visible at night by painting it or by providing lights or other illumination to alert approaching motorists might impose liability on the municipality responsible for maintaining this stretch of roadway. There is also the very real possibility that the driver was inattentive. His cell phone records can be requested in a civil suit by subpoena that might reveal the driver was using a smartphone at the time of the accident.

Other Reasons for Retaining a Lawyer

In any injury accident case, retaining a skilled personal injury lawyer is essential to ensuring that your claim is handled properly and that all avenues of possible compensation are explored. In many cases, and especially ones where there are no witnesses to the accident other than a party or parties to the claim, liability is often disputed or the injured claimant is alleged to have been partially been at fault.

Other steps that a lawyer can do for you if injured in a pedestrian accident include:

By promptly retaining a pedestrian accident lawyer, you can avoid the pitfalls that typically plague unrepresented claimants who often make ill-advised statements on liability and injuries that substantially jeopardize their claim and result in low settlement offers or a denial of the claim.

Statistics consistently show that claimants in personal injury cases receive substantially more compensation if represented by legal counsel than those persons who handle their own claims, even accounting for legal fees.

If you or a loved one sustained injuries in a pedestrian accident, you will need the considerable experience and  knowledge of a pedestrian accident lawyer from the law office of Burns and Jain. Call us at (617) 227-7423 to schedule a free consultation about your injury claim.