Every large urban area has certain intersections that are notorious for car crashes or are hazardous to pedestrians and bicyclists. These are due to faulty road design, inadequate road maintenance, poor planning for increased traffic and pedestrians, lack of traffic calming measures, crazy configurations that have befuddled highway road designers, or an omission of signage or road markings that only causes confusion. Boston is not alone in having a number of dangerous roadways and intersections where large numbers of accidents occur for these and other reasons. If you were injured as a motorist, passenger, or pedestrian by the negligent driving or conduct of another person, call a car accident lawyer at Burns and Jain. 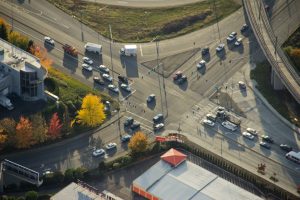 For a number of years, MassDot has been ranking the most hazardous roads and intersections around Boston based on the high number of accidents at these locations, but it recently changed its criteria. It has now released its newest list of the 100 most dangerous intersections in the area using a 25-meter search distance around each crash to create clusters, though if different clusters were found to share a common crash, they were merged into a single cluster. Also, the criteria relied on how the crash site was characterized by the investigating officers as:

All accidents, fatal or injury, were weighed together with fatalities weighted by 10, injuries by 5, and property-only, reported or not, by 1.
As a motorist or pedestrian, you may want to be at least aware of the 10 worst intersections in the Boston area with data used from 2014 to 2016, beginning with the worst:

Making a left turn into approaching traffic is one hazard at this crossing. Some motorists do not bother to stop or yield to anyone.

Even with left turn lanes and traffic arrows, motorists frustrated by long waits will streak across the intersection against the light and into oncoming traffic.

Rear-end accidents are common at many intersections with most occurring at rush hour or in the evenings when drivers are fatigued, impaired, or anxious to get home or to work.

Even with crosswalks in each direction at this 4-way intersection, pedestrians remain at risk because of inattentive or impaired drivers. Accidents also occur when motorists try to pass a car stopped for a pedestrian or when they fail to stop in time for a person in the crosswalk.

This complex intersection has turn lanes for 4 directions of travel, crosswalks in 2 adjacent lanes, and merging lanes where motorists proceeding from any direction feel they have the right of way and the other driver must yield. One crosswalk is over a merging lane that can invite trouble for pedestrians as many drivers will only be attentive to traffic crossing from their left and not to persons in the crosswalk.

DOT plans changes at this intersection where it hopes to install a roundabout in order to curtail the high incidence of dangerous left turns. A study showed that 65% of the crashes here occur when cars cross traffic to make a left turn. Other suggestions were for widening the road, adding turn lanes and adjusting the signals. Construction may not begin until 2022.

This bizarre stretch of road was originally ranked as the worst in Boston. It is due for a $14 million reconstruction in time for a new AAA baseball team to begin playing in Worcester in 2021. Residents want bike lanes and perhaps a roundabout because of concerns about the potentially high speeds of trucks and cars weaving through a proposed peanut-shaped traffic circle.

This strangely configured location is called the X and has troubled motorists and pedestrians for years. One resident explained that it was like a game of chicken to cross Sumner Avenue at the X. It has few controlled crossings, not enough crosswalks, and too many traffic signals according to many. The X is to have new safety measures in place soon as $6 million has been budgeted by MassDot.

Narrow roads, fast moving vehicles, and drivers texting are a deadly combination at this intersection. Proceed with caution when approaching this intersection, come to a complete stop, but be on the defensive for motorists who do not.

Car accidents are the most common type of personal injury claim with nearly 40,000 persons killed each year and 1.25 million suffering various injuries. Most accidents are preventable if drivers pay attention, do not drink or text when driving, drive at reasonable speeds, wear a seatbelt, and pay attention to the traffic laws. However, a fair number of casualties occur at certain intersections like the 10 noted above. Resources to reconfigure or re-design many of these locations are scarce though efforts are or will be underway to implement new and improved traffic safety measures that will save lives.

Car accident claims are not as clear-cut or as simple as many people assume. In too many cases, claimants handling their own claims have made serious mistakes that minimized the value of their claims or waived their rights to obtain compensation. Call a car accident lawyer at Burns and Jain at (617) 227-7423 to schedule a free consultation about your injury claim.