Recently, an accident involving two Brockton motorists resulted in an unrestrained driver being ejected from his vehicle. When the driver of an Audi attempted to pass another vehicle, an Infiniti, the two vehicles collided and spun out on a yard near the intersection of Sheridan and Benham Streets, Brockton. The Audi driver was ejected from his vehicle, though he did not sustain life-threatening injuries. The owner of the Infiniti fled the scene and was later determined to have been driving without a license.

Seat belts saved approximately 14,668 lives in 2016. More than half of the traffic fatalities that year included persons who were not wearing seat belts. According to the National Highway Traffic Safety Administration (NHTSA), seat belts reduce the risk of death by 45% and of serious injury by 50%. You are also 30 times more likely to be ejected from a car if unrestrained. The Audi driver in this accident was fortunate that he was not killed. There is no excuse at all for not wearing a seatbelt when in a motor vehicle. 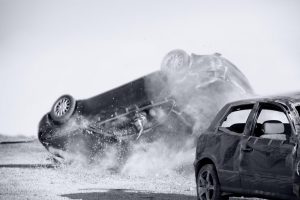 This accident underscores the reality that Massachusetts seat belt usage is among the lowest in the nation, although our usage has risen recently to 82% in 2017, a significant jump from 74% in 2016. In 2016, our state was 46th, just ahead of Mississippi, Montana, Arizona, South Dakota, and New Hampshire. The national average is over 90%. One glaring reason for the low usage rate is that failure to wear a seat belt is a secondary violation in Massachusetts, meaning that a police officer can only cite you if you are being detained for some other violation such as improper or unsafe passing. Still, it is encouraging to see that our motorists are finally coming to their senses, though we still lag behind the rest of the country.

Improper passing is a factor in causing serious car accidents. It occurs when a vehicle does not have enough time or space to pass another car, or when a motorist attempts to pass a car around a blind pass where the driver is guessing or assuming that no other car is approaching.

Another example is a car attempting to pass a bicyclist. In Massachusetts, you must give a bicyclist at least 3-feet of space when passing. Encroaching into a bike lane is commonly done by motorists but is legal only if it is to make a turn, and only after being certain that no bicycle traffic is being impeded.

Imposing liability can sometimes be difficult in improper passing accidents, especially if a car was attempting to pass another since both motorists could assert that the other driver was trying to pass and collided with their car. Absent an independent witness, you might not  be able to collect any compensation if injured as state law requires that the other party be at least 51% at fault before you can collect compensation.

A Brockton car accident lawyer might be able to help determine liability by having the property damage examined by an expert. Some cars are equipped with cameras on the dashboards that may reveal if that car was proceeding straight and was not trying to pass. If the accident was near an intersection, street cameras might have recorded the accident as well.

In the Brockton accident cited above, both drivers were charged, though the driver who fled was only charged with leaving the scene of an injury accident along with the license violation while the other driver was ticketed for negligent driving and a marked lane violation. Police may have accepted the account of the accident by passengers in the car owned by the driver who fled. Fleeing the scene of an accident, though a crime in of itself, is not necessarily indicative of a consciousness of guilt. In this case, the driver may have fled because he lacked a valid driver’s license.

Damages in an improper passing accident can be minor or substantial. Such accidents could result in head-on with catastrophic results or side-swipe collisions. If a bicyclist was struck because the car passed too closely, the rider could easily suffer traumatic brain injury, broken limbs, or internal organ damage. Even a side-swipe at a high speed can cause both motorists to lose control.

Typical damages may include:

Retain a Brockton Car Accident Lawyer from Burns and Jain

Improper passing accidents can pose liability issues as well as those involving damages. You will need the services of an experienced and knowledgeable Brockton car accident lawyer from Burns and Jain who has handled difficult cases before and achieved satisfactory results. Call our office today for a free consultation about your car accident injury claim at (617) 227-7423.