Buses are ubiquitous on our roadways and include school buses, public transportation vehicles, and private transports. They are a common sight and in many urban areas, there are now special bus lanes that allow them and regular passenger vehicles to move more freely so as to relieve congestion on our increasingly crowded roadways.

Bus drivers are also given special training on operating them, including how to make turns, to stop, load passengers, and to drive defensively. Unfortunately, when a bus is involved in an accident, the results can mean catastrophic injuries.

A recent BAT (Brockton Area Transit) bus crash in Brockton only involved the bus. Although initially no reason was given for the accident, the bus driver had lost control of her vehicle and struck a fire hydrant before coming to rest against a tree. The damage to the bus was devastating, trapping the driver under twisted metal that took firefighters 90 minutes to carefully cut through to extricate and airlift her to a hospital. Two bus passengers fortunately only suffered minor injuries.

There are approximately 63,000 bus accidents throughout the US each year. Given their relatively small number as compared to the millions of passenger cars and the 5 million or so auto accidents, the number of accidents pales in comparison. 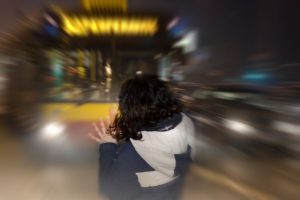 But buses are prone to certain mishaps that a passenger vehicle or heavy truck are not. Roll-overs are a serious risk that can result in traumatic or fatal injuries. Compounding this are the lack of seatbelts, restraints or airbags. In a serious collision, passengers can be thrown from their seats into the aisles or other passengers and seats, or may even be ejected out the window or door.

Many serious bus accidents are the result of a driver’s fatigue or impairment from drugs or alcohol. Even though bus companies and municipalities are required to have drug testing protocols, drivers still use medication to keep them awake during long and monotonous rides. Many fatal accidents have resulted from impaired drivers or from their falling asleep at the wheel, causing them to crash into other vehicles, road barriers, or to leave the roadway and to roll-over.

Municipal buses are often old and have extensive wear and tear on them. Steering and brake defects that were overlooked or ignored can cause loss of control and result in serious crashes. As common carriers, any failure to properly service or maintain a bus can lead to a finding of liability on the part of the bus company.

If you were injured in a bus owned by a private carrier, you can bring a claim against the private entity as you would against a private individual. But if your claim was against a public transit bus in Massachusetts, then your claim is against the MBTA and you must follow certain rules for government tort claims under the State Tort Claims Act.

Finding liability can be an easier task for your bus accident lawyer if the bus company or MBTA was negligent in any of the above scenarios. Since buses are common carriers because they transport passengers for a fee, drivers and the bus companies or municipalities that own and operate them are held to higher standards of care in providing for your safety. For instance, bus drivers are presumed to be under the influence of alcohol if the blood alcohol concentration (BAC) level is 0.04% as compared to 0.08% for all other drivers.

Damages in a bus accident can be catastrophic. They may include:

Seek experienced and competent legal representation for your bus accident claim. Only a bus accident lawyer with decades of experience in handling such claims can get you the most compensation available based on numerous factors that can affect your claim. Call a bus accident lawyer from Burns and Jain today at (617) 227-7423 to schedule a free consultation about your injury claim.