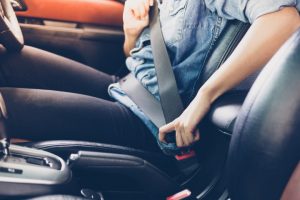 There was finally good news regarding our state’s woeful rate of seat belt usage. Massachusetts’ drivers jumped from a seat belt usage of 73.7 % in 2017 to 81.6 % this year, the biggest leap ever recorded in one year. Unfortunately, we still lag far behind the national average of 90.1%.

Not wearing a seat belt significantly increases the chances of you sustaining more serious and fatal injuries by 50%. This is common knowledge that everyone who takes a test for a driver’s license is aware of. In other words, there is rarely an excuse for not wearing a seat belt at all times.  See Princess Di, 1997.

Our state has consistently been one of the worst states for motorists and passengers wearing seat belts. Although it is unlawful to drive while not wearing a seat belt, our state makes it a secondary violation, meaning that law enforcement cannot stop and cite you unless you have violated some other traffic offense or can articulate some other reason that necessitated stopping your car. We do have pending legislation that would change this, though this would not be the first attempt to change this law. Opponents of the change maintain that making it a primary offense will unfairly target minorities. A 2014 study in Florida found that black motorists were pulled over for seat belt violations at twice the rate for whites, giving the police another flimsy justification to pull over motorists and to search their vehicles for drugs or contraband. Without dash-cam footage that you were wearing a seat belt, it will only be your word against the police officer’s.

The libertarian argument has also prevailed here, that the government has no right to protect us from ourselves since not wearing a seat belt does not affect the safety of other motorists. There are also studies that seem to show that belted drivers may drive more recklessly than those who are not, perhaps being more confident? But if persons are injured or killed because they did not wear a seatbelt, it will impact families who must deal with either the loss of a loved one and its attendant emotional and possibly financial consequences, or with caring for and paying the substantial medical expenses for those who are permanently disabled because they neglected to buckle up. The group that was the most reluctant to buckle up were pickup truck drivers and younger motorists. Their health care costs effect us all.

The new results will pull up our state from its 2016 ranking as number 45 among the states for seat belt usage when our percentage was 78%. That was the last year when these rankings were published.

Safety advocates point to its campaign directed at younger motorists and pickup truck drivers as the primary reason for the increase. But state officials feel that the rate will not increase significantly to approach the national average until the law is changed.

Massachusetts courts do not allow defendants to introduce evidence that you neglected to wear a seat belt to decrease their degree of fault or liability in a car accident injury claim. However, defendants can introduce such evidence if they allege that your injuries would not have occurred or been exacerbated if you had been belted. The burden of proving this is on the defendant. If a judge rules that the defendant failed to meet his burden of proof, then evidence of your not using a seat belt will not be considered.

This will require expert testimony by defense witnesses, which your car accident lawyer will have to counter with your own experts supporting your assertion that not wearing a seat belt did not affect or cause the severity of your injuries. But if you were ejected out of your car or through the windshield at impact, then you may find it difficult to assert otherwise.

If the evidence is sufficient and the judge allows evidence of your failure to buckle up to be considered, then comparative negligence principles will apply. For instance, if a jury determines that your failing to wear a seatbelt contributed to 60% of your damages, then your compensation will be decreased by that degree of comparative fault.

Your damages in a car accident vary and depends largely on the accident’s severity, if you missed time from work, and how your injuries have affected your daily living activities. Damages may include:

Damages in car accidents vary considerably. They can include:

You may still be entitled to compensation even if you were not wearing a seat belt at the time of the accident. Also, the defense will have to prove that your injuries would not have been as extensive or severe if you had been buckled up. This is just one of several issues that your car accident lawyer will handle in many car accident injury claims. The lawyers at Burns and Jain have extensive experience in these matters and offer you the best opportunity to get the most compensation for your claim.

Call our offices today at (617) 227-7423 today for a free consultation about your personal injury claim.