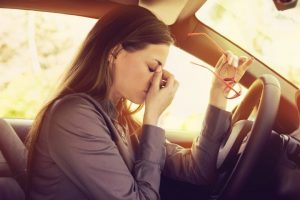 Wearing contact lenses or eyeglasses is second nature for those of us who have had poor eyesight for years. If your driver’s license requires you to wear corrective lenses, glasses or contacts, then it is foolish to think that you can drive even a short distance without them without endangering yourself or others.

This point was highlighted in a recent accident in Dedham, Massachusetts, when a 52-year old woman decided for some unknown reason to drive without her glasses. The consequences of her negligence were to strike two teenagers crossing the street on their way to school. After striking them, a car behind hers also struck the two girls. Both girls later died from their injuries. Police commented that the circumstances of the accident were difficult to unravel, however, the woman who first struck the teens admitted that she was not wearing her glasses and that she mistook one of girls for a bag of trash on the roadway. Both drivers were charged with negligent motor vehicle homicide.

Driving without proper corrective lenses is unlawful. Some states consider this a non-moving violation and only impose a fine of a few hundred dollars while others, like Florida, consider it a second-degree misdemeanor with a maximum sentence of 60-days in jail. In the United Kingdom, motorists found to be driving without corrective lenses face up to 15-years in jail.

You are 4 times more likely to be in accident if you drive without glasses if they are required on your driver’s license. We all have different degrees of sight restrictions but if you are stopped for a traffic violation or questioned following an accident, the officer may ask if you were wearing corrective lenses. This is more likely if you were in an accident.

In a study conducted by Direct Line, an insurance provider firm, it found that of 2,000 drivers surveyed, 20% had been in an accident in the previous year. Of that figure, 70% had not been wearing their glasses! Also, 25% of persons in the survey admitted to rarely wearing corrective lenses while driving. 40% said they had not had an eye exam for more than 2-years.

Issues in the Dedham accident that might arise are:

Even if the girls were not walking in a crosswalk, both motorists were driving in a residential area and should have been alert and driving cautiously. The fact that the first driver who was not wearing her glasses was unable to distinguish a trash bag from a human being would indicate that her vision was likely significantly impaired so that driving without corrective lenses under these circumstances might be construed gross negligence. Talk to an experienced car accident lawyer from Burns and Jain if you or a loved one was injured in such accidents.

There are also accidents where a driver claims he failed to see the pedestrian or the other vehicle because the sun blinded him or because of excessive glare. If a motorist is driving during the time of day when the sunlight is glaring at eye level, or it is a particularly sunny day, and the driver fails to notice a pedestrian or other vehicle and does not stop or take evasive action, he cannot blame the sun. If the sunlight is intense or a motorist is on a street with high glare that is blinding him or her, then safety measures must be taken, which includes pulling over to the roadside or proceeding with utmost caution. All vehicle drivers should have sunglasses in their car.

As a motorist, you have a duty to exercise reasonable care while driving. This includes wearing corrective lenses and doing what a reasonable person under similar circumstances would do, which in case of intense glare or sun means wearing sunglasses or proceeding slowly and looking for hazards in the road.

Damages in car accidents vary considerably. They can include:

In a wrongful death claim, brought by the administrator for the decedent’s estate, damages can include:

Car accidents can have easy or complex issues of liability but proving damages in any kind of case can sometimes be difficult. The car accident lawyers at Burns and Jain have decades of experience with injury and death claims involving all types of car accidents.