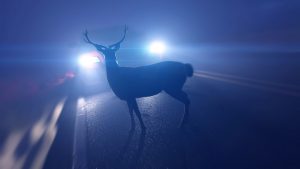 If you live in rural areas, or even in many suburbs, the risk of encountering a deer or other large animal like a moose suddenly in your headlights is very real. In Massachusetts, the chances are 1 in 469 that you will come upon a deer on a suburban or rural roadway. According to the Massachusetts Division of Fisheries and Wildlife, there are between 7,000 and 10,000 car accidents in our state each year involving deer, though it is rare for anyone to be killed in such accidents. There is no reporting requirement if you do have a deer accident so exact numbers are unavailable.

There are about 90,000 white-tail deer in Massachusetts, so it is not unusual to sight one during a drive in the dusk or evening hours. But because of the weight of these animals, colliding with one can shatter your windshield or cause you to lose control of your vehicle. Also, moose are occasionally observed on our roadways. They are much larger than deer but can be more difficult to see at night because of their dark color. They are also considered more unpredictable than deer. If you see one on the side of the road, be aware that they could suddenly bolt across the roadway.

The early winter months pose the greatest risk, or from October to December, which is mating as well as hunting season. Deer are increasingly being displaced from their habitats and their populations are growing instead of diminishing. You can often see them foraging around grassy areas and near roadways in forested areas.

To minimize the chances of encountering a deer that can cause substantial property damage to your vehicle as well as serious injuries, here are some suggestions:

If your car is damaged or you are injured, you should call the police immediately as your insurer will want to see an official report of the incident before it will accept a claim. It helps to take photos of the scene, your property damage, and of the animal if it was wounded or killed. If the deer is still alive, call 911 so that it can be properly removed. Do not approach the animal as a large, wounded animal with sharp hooves and powerful legs can seriously injure you.

If you have a property damage claim, you need to have comprehensive coverage. But if a car that swerved to avoid hitting a deer collides with your vehicle, and causes you serious injuries, do you have a claim against the driver or even the state?

First, you will likely not prevail against the county or state by claiming that the municipality should have done more to have minimized or prevented this accident by failing to post a sign or taking steps to reduce a large deer population. However, if there had been known and reported deer/car accidents on the stretch of roadway where your accident occurred, you might assert that the state or county had prior notice of the risk of collisions and failed to warn motorists.

Your more likely claim would be against the driver who did collide with your vehicle. If the motorist had been speeding, was under the influence, or performed an unreasonable evasive maneuver, then your claim of negligent driving by that driver would be more credible and acceptable. All motorists are required to exercise ordinary care when driving. If the defendant motorist failed to use ordinary care in how he/she acted under the circumstances, then you are more likely to be compensated by that individual’s insurer. If you need advice or representation in such accidents, call a car accident lawyer from Burns and Jain.

Damages in a Deer/Auto Accident

Damages in deer or moose accidents with a motor vehicle can be substantial  and cause catastrophic injuries. Damages can include:

Deer or moose accidents can have complex issues of liability or even coverage. The attorneys at Burns and Jain are car accident lawyers with decades of experience in handling these unusual cases and will give you the best opportunity to obtain the most compensation for your injuries.