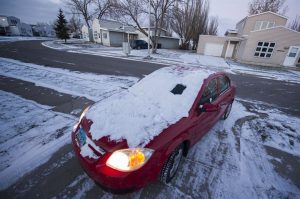 Facing another cold, Massachusetts winter morning on your way to your car can be depressing, to say the least. Your car’s windshield is solid snow and ice and it can’t be more than 2 degrees outside. A large pile of snow is also on your roof.  So, you shave off a small amount of ice and snow from the front windshield, just barely enough to see ahead of you, get the car started and you’re off. But you fail to see a car to your right at the next intersection and you slam into it.

A similar scenario to this occurred recently when a Commonwealth police officer followed a Connecticut driver named Bill who had failed to remove the snow from the top of his car and could barely see out of his windshield because of his lax attempt to clear off the ice. The officer cited Bill and then posted a photo of Bill’s car on the state police Facebook page with a message to motorists to not be lazy, like Bill, and fail to clear off your windshield. Commonsense tells us that Bill was risking an accident by driving with obscured vision. I will add that we represented a young girl who was seriously injured by a motorist who failed to stop for children crossing the street to A SCHOOL BUS in North Andover because she failed to clear her windshield.

Is it an Offense to Not Clear Snow Off Your Car?

While no specific Massachusetts statute indicates that this is a traffic offense, our officers can in their discretion decide that a vehicle with a large amount of snow on its roof constitutes an unsecured load, which is an offense, or can cite the driver for improper removal of debris. The former charge carries a fine of $200, while the latter is $35. In either case, not removing the snow from your car can present a hazard not only to yourself but to other motorists.

If you have ever driven with snow on your roof or windshield, at some point it melts enough and starts flying off. In one case, a Massachusetts state patrol car had its windshield cracked when snow and ice flew off from a passing car.

All motorists have a duty to exercise ordinary care when operating their vehicles. Not only does this mean obeying all traffic laws and driving cautiously, but it also entails preparing your car for winter driving. For instance, driving the speed limit of 65 mph in a driving snowstorm exposes you to driving too fast for conditions. Likewise, a car driving with copious amounts of snow and ice on its car roof that flies off and cracks the windshield of your car, or which causes you to lose visibility and control and be involved in an injury accident can impose liability on the irresponsible motorist. Your car accident lawyer can make a claim against that motorist for negligence in failing to exercise ordinary care for failing to remove the hazard. It is entirely foreseeable that large amounts of snow on the car of a passing motorist could fly off and into your windshield, effectively blinding you and causing you to lose control of your car.

Driving with obscured vision because of an iced windshield that barely offers a view of the roadway is also an omission to exercise reasonable or ordinary care. The standard is how a person in the exercise of reasonable care would act under similar circumstances. Obviously, such persons would remove the snow from their car roof and windshield so that they could properly see and drive safely.

When driving, be aware of the potential dangers that the weather offers from snow, ice, sleet, and wind. You are responsible for maintaining control of your car and for what happens if you fail to use proper judgement to avoid creating hazards.

Most of us engage in safe driving practices at all times but since many of us do not, some reminders are always a good thing. For winter driving, remember to do the following:

These are all commonsense measures that, unfortunately, not everyone follows. Simply taking the time to be sure your car is safe to drive can save you from the headache of a property damage claim or the more serious one of an injury to yourself or others.

Damages in a Winter Car Accident

As an injured claimant, you have the burden of proving not only liability by another motorist or other party, but also your damages. It is essential that you retain a car accident lawyer from Burns and Jain to handle your claim so as to preserve all your damages and to get you the compensation you deserve. Damages in a car accident may include:

Car accidents are common in the winter months from drivers not exercising caution while driving in wintry weather. If you or a loved one was injured by a negligent or irresponsible driver, then have an experienced car accident lawyer from the Law Offices of Burns and Jain handle your claim from start to finish.

With decades of experience and millions of dollars gained for injured clients in all types of injury claims, you are assured of representation from proven professionals. Call our office today for an in-depth analysis of your injury claim: (617) 227-7423.