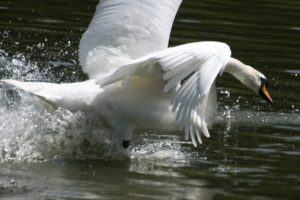 Five years after an unusually tragic incident, the widow of an Illinois man who drowned at a pond located within his condominium complex after being attacked by a swan has filed a wrongful death lawsuit against the property management companies that owned and maintained the residential complex. The decedent had had the task of feeding the swans and was in his kayak when a swan unexpectedly attacked him, causing him to fall into the water. Because he was wearing boots and other heavy clothing, he was apparently unable to climb back into the kayak or reach a place of safety before going under the water’s surface.

The lawsuit contends that the association and property management companies were negligent in keeping a dangerous animal on the premises and for failing to warn the decedent of the dangerous propensities of swans. Swans are known for being very territorial and for becoming aggressive if they feel threatened. These birds are not an uncommon sight on ponds or other waterways where private or public owners wish to limit populations of geese that pollute property with their droppings and generally annoy people walking around a waterway or while boating.

The lawsuit raises issues of premises liability here in Massachusetts. Under these principles, a landowner has a legal duty to keep its premises safe and free of hazards. If it is a commercial property such as a business, then persons who are lawfully on the property are known as licensees. These persons are encouraged to come onto the premises to browse or purchase products or services. Business or commercial landowners and their agents have a high duty of care that involves inspecting the property and fixing or removing hazards it is aware of, or should have been aware of. Also, landowners must have had either direct notice of the danger by having been advised of it or by its own observation of it, or by constructive notice. Constructive notice exists where a hazard has been present long enough so that the owner knew or should have known of it because of its duty to regularly inspect the premises.

In this particular case, the widow’s wrongful death lawyer could assert that the homeowner’s association and property management companies should have been aware of the swan’s dangerous propensities if it had done its due diligence. It apparently hired or allowed the decedent to feed and care for the animals, although anyone lawfully on the premises could have kayaked onto the pond and encountered the swans. The issue may be whether the management in the exercise of its legal obligation to keep its premises safe should have known about or been on notice of the swan’s dangerous traits and warned the decedent, or anyone else lawfully on the pond or premises, of the danger the swans posed.

Pets, on the other hand, are generally covered by a private homeowner’s insurance. A homeowner’s association or property management company may have liability insurance to protect it in case wild or exotic animals on the property such as geese or swans that are not owned by any one person but which are permitted or even encouraged to be on the premises attack someone. In this case, it looks like the landowners encouraged the swans, so they may have some responsibility.  Some insurance policies will not cover “pets” that are wild or undomesticated such as wolves, alligators, or poisonous snakes, although some will provide special coverage for such animals. It is likely that the Illinois property management and homeowner’s association in the swan case had liability insurance to cover this incident since the swans could be considered the property of the complex.

Unlike the usual premises liability claim where the injured claimant or plaintiff must prove that the owner had either direct or constructive notice of the danger for a certain period of time and failed to act, animal attacks are generally a matter of strict liability.

In the case of the swan attack, the decedent was likely in the act of feeding the swans when one or more of them became threatened by the intrusion onto its territory and attacked the man.

A wrongful death lawyer in the swan case may argue that the association be held strictly liable for the animal attack if the swans were deemed the property of the association so long as the state’s strict liability law applies to animals other than dogs. In the alternative, the association and property management company may have had a legal duty to have investigated whether swans pose certain risks to people under certain situations and thus have sufficiently warned the decedent and others of these risks. By not doing so, it breached its duty of care to the decedent and may be held liable.

The widow in the swan case is seeking damages the wrongful death of her husband, most claims are in the hundreds of thousands or millions of dollars. In Massachusetts, wrongful death claims are brought by the administrator for the decedent’s estate on behalf of the immediate family members. Damages typically include:

Wrongful death claims are often complicated and involve complex legal issues so that you will want to retain a wrongful death lawyer with considerable experience and litigation skills to ensure you get the most compensation.