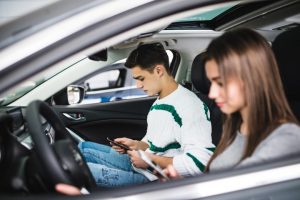 Texting while driving has caused too many collisions.  Since 2010, Massachusetts has outlawed texting while driving. This law, however, did not ban using your cellphone for making calls or scrolling through your email unless you are a driver under the age of 21. In the past few years, lawmakers have introduced legislation banning any hand-held use of cellphones for all drivers but the measures either stalled or died quietly in the House. Governor Baker did not endorse a full ban either, feeling it was unfair to drivers in older vehicles that lacked the technology that permitted hands-free use.

Governor Baker has changed his mind, however, and now fully supports a bill that would only allow hands-free cellphone use, feeling that the time has finally arrived because the majority of motorists can now utilize Bluetooth technology permitting hands-free use without having to pay extra for it.

The bill, if passed by both chambers, would impose a fine of up to $500 for a violation. A proven violation would be helpful if a personal injury claim is filed against someone who was texting.  It is anticipated that the new law will lead to a decrease in texting and driving or any other use of a hand-held cellphone though many remain skeptical that it will have much of an impact. Many cellphone users are confident that they can safely drive and use their smartphones at the same time, regardless of the substantial fine involved–even if it involves texting. Studies indicate that although the overwhelming majority of drivers recognize the dangers of texting and driving, 77% of adults and 55% of teenagers feel they can safely drive and text at the same time.

Across the US, distracted driving is responsible for about 1.6 million crashes each year. Although distracted driving consists of engaging in any activity in the vehicle that causes you to focus away from driving or that divides your attention, most people are really talking about cellphone use while driving and particularly texting. In the U.S., about 9 people per die and over 1,150 injured each day in auto accidents involving a distracted driver. Your chances of being in an accident increases by 23 times if you text and drive.

The National Highway Traffic Safety Administration (NHTSA) along with other safety organizations report that the average motorist takes about 5 seconds to enter a text or to read one. At any speed, this is enough time and distance for a motorist to not see a hazard in the roadway and to take measures to avoid it. This includes another car that has suddenly veered into your lane, not seeing a pedestrian in the crosswalk, or failing to stop at a red traffic signal. Despite public awareness campaigns over the past several years, traffic-related deaths in Massachusetts over the past 3-years have increased by 15%.

Although hands-free use of cellphones while driving may be safer than the hand-held variety, it is still an activity that divides your attention between talking and concentrating on what you or your passenger is saying and driving your vehicle. Unless your attention is fully or mostly focused on driving, your observation/reaction time is increased or you may not notice a hazard that suddenly presents itself on the roadway.

The best solution would be to ban any use of a cellphone while driving. There is an app (of course) that automatically turns your phone off when you are driving. For those people who cannot imagine not having access to a cellphone for any amount of time, remember that people have been existing on this planet for several millennia without cellphones and were driving motor vehicles without smartphones for about 100 years.

Call a distracted driving lawyer if you were injured in an accident where cellphone use by the responsible drive is suspected or confirmed. Any personal injury matter should be handled by an experienced lawyer who understands the claim and litigation process and can prove the damages you have sustained.

Typical damages in a car accident injury claim include:

An injury claim based on someone’s negligent operation of a motor vehicle are often not a clear-cut as you think. Very often, there are conflicting versions of how the accident occurred or there are other factors that may have contributed to its cause.

Call the lawyers at Burns and Jain where you can retain a highly experienced and skilled distracted driving lawyer for your case and obtain the compensation that you deserve.