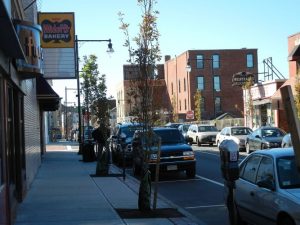 If you do not live in Worcester, then you may be surprised to learn that this modest sized city of over 180,000 (the second most populous city in the state and in all of New England) has the worst safety record for pedestrians. If you do live here, then this fact may not be a revelation.

A study by 1Point21 Interactive of San Diego analyzed crash and pedestrian collision records across the state and reported that Worcester is the most hazardous city for pedestrians in all of Massachusetts, having 50 of the 496 most dangerous intersections in the state. The 496 figure reflects those intersections with at least 5 pedestrian collisions within a 15-year period between 2001 and 2014, the time span used in the study.

Researchers found that Massachusetts streets had 25,056 auto vs. pedestrian encounters in this time period. 14% of these accidents occurred at these 496 intersections, which represents less than 1% of the total in the state.

What about Boston? Unfortunately, data is not forthcoming from our largest city for some reason. Either city officials are reluctant to report pedestrian accidents or the department responsible is not gathering the necessary data or is just not making it available. Without the data, the implementation of safety measures can be stymied and resources cannot be diverted to troublesome areas.

Response to the Worcester Data

Worcester’s city council is aware of the problem and has discussed lowering the speed limit citywide to 25 miles per hour. It has that authority under the Municipal Modernization Act that permits local municipalities to lower speed limits within densely settled districts so long as the street is not a state roadway. It also allows cities to lower speeds to 20 mph with the approval of MassDot.

Large urban areas like New York City have seen decreasing rates of pedestrian accidents after lowering speed limits. Statistics show that a pedestrian has a 90% chance of surviving a collision with a vehicle at 20 mph but only a 10% chance if the vehicle is traveling at 40 mph.

Officials have cited other methods for making its intersections more pedestrian friendly and safer. These include increased law enforcement in these areas and sequencing lights to deter drivers from attempting to time or beat the light. Re-designing some streets is already underway at Main Street from Madison to Thomas that will include new street lights, reducing traffic lanes from 4 to 2 and installing turning cutouts at intersections.

Other measures might include flashing lights at intersections that a pedestrian can initiate that now exists at Belmont and Edward Streets, or just installing a traffic signal so that vehicles have to stop. If not practicable, then perhaps a speed bump just before the intersection that will force motorists to slow down.

Damages in a Pedestrian Accident

If you or a loved one was injured or killed in a pedestrian accident, you are entitled to damages. Your Worcester pedestrian lawyer will obtain documents from your employer, school, police, and medical providers to prove the nature and extent of your injuries and loss.

Typical damages in an injury claim include:

If you or a loved one sustained injuries in a pedestrian accident in Worcester or an adjoining community, contact personal injury lawyer Neil Burns. Mr. Burns has been a Worcester pedestrian lawyer for over 30-years, representing the victims of pedestrian, vehicle and other accidents. Call him today for an in-depth analysis of your injury claim.