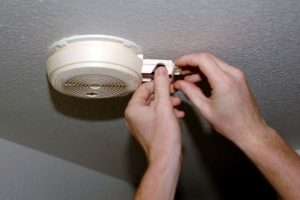 Smoke alarms and carbon monoxide detectors are required in all residences in Massachusetts. Owners of rental units must ensure that smoke alarms are in good working condition and comply with state law. Homes that were built before 1975 and are sold must have smoke alarms with a 10-year life span. No residential property can exchange owners without its smoke alarms being certified by the local Fire Marshall. If people are injured or killed because a smoke alarm in their residence was missing or failed to operate, you may have a injury or wrongful death lawsuit.  We represented a family in which a malfunctioning smoke detector was the cause of a mother of a two-year old’s death.

Call wrongful death lawyer Neil Burns if your loved one suffered fatal injuries in an incident where a smoke alarm was missing or failed to work.

There are two types of smoke alarms on the market today–ionization and photoelectric detectors. The difference between the two is that an ionization alarm detects fast-moving fires while the photoelectric detector will note a smoldering or slow burning one. The problem with ionization devices is that they are susceptible to false alarms in the presence of steam from a bathroom shower or stove. The alarm is activated when smoke or steam blocks the current running between two electrodes.

Photoelectric detectors emit a beam of light that will set off an alarm when smoke crosses the beam. In smoldering fires, an ionization alarm was shown to be an average of 15 to 50 minutes slower than a photoelectric one in tests conducted by the Consumer Product Safety Commission, Texas A &M and other agencies. A smoldering fire is one that is slow moving with significant smoke and is more likely to result in occupants succumbing to smoke or not being able to flee in time. Fast flame fires are ones based on accelerants such as gasoline, grease and oil. An ionization detector is more apt to alert occupants for these types of fires.

Massachusetts has strict laws regarding smoke alarms and its legislators have considered the efficacy of both systems by enacting a law in 2010 requiring that both be installed. The law mandates that an ionization detector cannot be placed within 20 feet of a kitchen or bathroom that has a shower or bathtub. Photoelectric detectors may be installed in these areas. There are detectors that contain both systems and are legally acceptable.

If you are a homeowner or own rental housing, contact your Fire Marshall or smoke alarm lawyer to see if you are in compliance since you risk substantial liability should injuries or fatalities result because you failed to comply.

If your loved one suffered fatal injuries in a residential fire and it is determined that a smoke alarm was not installed or the landowner neglected to comply with state law on smoke detectors, then you may have a wrongful death lawsuit. If the smoke alarm was installed but malfunctioned, then the landowner and/or installer may be held responsible.

Premises liability law would apply in such cases. Although a landowner does not have an absolute duty of care to renters and occupants or guests such as for unseen or unforeseen hazards, their duty does include foreseeable conditions such as a house fire. In the event of a fire, an owner’s failure to install or to properly install a state-compliant smoke detector or detectors since both ionization and photoelectric detectors are mandated can be evidence of a breach of reasonable care.

Your Massachusetts smoke alarm lawyer will investigate the circumstances of a fatal fire to see if the detector was installed, what type of detector was present, and if the alarm sounded and when. Experts are usually employed in such cases.

In a fatal accident, a claim may be brought by the administrator for the decedent’s estate for the benefit of immediate family members (spouse, children, parents). You will need the services of a smoke alarm lawyer in missing smoke alarm cases. Damages include:

Gross negligence might be demonstrated if the owner was aware of the lack of smoke detectors in the residence by a Fire Marshall’s inspection or any other inspection, and of the state law regarding compliance but neglected to install them nonetheless causing wrongful death.

Massachusetts has a 3-year statute of limitations, or deadline, for filing a personal injury or wrongful death claim.

Neil Burns is a smoke alarm lawyer who has handled numerous wrongful death claims for families throughout the commonwealth for more than 30 years. Contact Neil Burns if you have a loved one who perished in a fire where a smoke alarm was missing or malfunctioned.