Cell phones are everywhere, of course, and it is a common sight to see people walking on the streets or crosswalks with phones to their ears or talking on ear phones who are oblivious to what is around them. Now, observe that by drivers in motor vehicles and you have a potential tragedy in the making. Most states ban some form of cell phone use, but only 14 states and the District of Columbia ban all use of handheld phones by everyone. Now, Massachusetts may join that select group.

Since 2010, Massachusetts has only banned texting while driving, although any cell phone use by drivers under 18 is banned. The law has been difficult to enforce since law enforcement found it difficult to determine if someone was actually texting or simply inputting a phone number, which is not unlawful for adult drivers.

This may all change with the passage of Senate Bill 9002, which now goes to the Massachusetts House of Representatives for consideration. Included in the bill were amendments from Senator Michael Moore of Shrewsbury and supported by State Senator Kathleen O’Connor Ives of Salisbury that would require multiple offenders of the law to take distracted driving classes, similar to DUI classes required for drunk driving offenders.

There are exceptions to using a handheld phone so long as these circumstances exist: 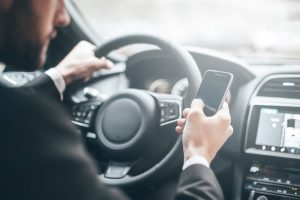 Another amendment to the bill was filed by Senator Eileen Donogue of the First Middlesex District that would disallow even holding a handheld cell phone in your lap.

You may, however, use the phone to activate, deactivate or to initiate a function in the phone. Otherwise, the law bans sending or reading texts or emails or any other use of the internet.

The penalties for violating the cell phone ban, should it become law, wil be:

Is there a Consensus?

Not everyone is on board. There are the folks who feel that nearly any government regulation or rule is an intrusion in one’s private affairs and the right to make individual choices. Privacy and civil rights advocates contend the law would be another justification for police to pull you over if they suspected cell phone use. This could be a pretext for stopping even more minorities who are already stopped and questioned by police far out of proportion to their numbers. For example, African-Americans comprise 25% of the Boston community but have been the subject of 71% of all citizen-police encounters since 2015.

However, the roads are public and folks don’t have to go on them.  Moreover, it is incontrovertible that distracted driving, which is mainly cell phone use, causes accidents. In 2015, there were 3477 people killed in traffic accidents nationwide as a result of distracted driving and over 391,000 injured. Safety organizations such as the National Highway Traffic Safety Administration have been encouraging stricter laws and greater enforcement for several years. Studies show that drivers using a cell phone in a motor vehicle take his or her eyes off the road for an average of 5 seconds, more than enough time and distance to fail to see a hazard and to take evasive action.

Injuries from a distracted driving accident can be minor to catastrophic, depending on the speed of the vehicles or if a pedestrian or bicyclist was involved. The amount of compensation you may obtain will depend on the nature and extent of your injuries, age, earning capacity and other factors that a personal injury lawyer can explain to you.

Damages in an injury case may include:

Contact personal injury lawyer Neil Burns for an assessment of your case and the process involved. Neil Burns has been practicing injury law for over 30 years and has represented injured victims and their families throughout the commonwealth.