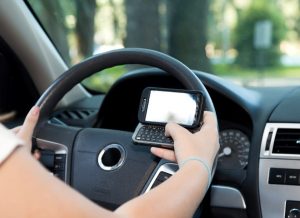 Distracted driving is now the main focus of auto safety advocates, displacing drunk driving though that still remains a major concern and will likely continue until autonomous or self-driving vehicles become the norm. And the concern over distracted driving is really over use of smartphones with Apple becoming the antagonist in the discussion. Apple has been sued in various lawsuits for allowing its phones and apps to be used by motorists despite apparently having the technology that may disable the device while driving or at least give the user an opportunity to do so.

Distracted driving is any activity that results in the driver focusing his or her attention away from the act of driving. All safety and driving experts agree that you need to totally concentrate on driving and that even a few seconds of being distracted can be catastrophic.

Distractions while driving consist of talking, grooming, changing a radio station, installing or ejecting a music tape, eating or drinking or glancing out the window. But the main act of distraction is texting while driving. Statistics indicate that texting takes an average of 5 seconds. At a speed of 60 miles per hour over that period of time, your car travels the length of nearly 150 yards or more than the length of a football field.

The National Highway Traffic Safety Administration estimates that 660,000 drivers are texting or using their cell phones at any one time each day. 3,477 persons were killed in distracted driving accidents in 2015, making distracted driving a major cause of highway deaths.

Why Blame the Maker?

Plaintiffs suing Apple contend that it has neglected or refused to install available technology that turns off its smartphones while the user is driving. Apple has argued that other distractions account for vehicle deaths and injuries such as applying lipstick or other makeup or consuming food from fast food restaurants and that those manufacturers or companies are not held liable. Their contention falls short because they cannot install functions that can prevent their products from being used while driving.

Apple and other smartphone manufacturers and designers have technology that detects when the user is or may be in a moving vehicle and either warns the user or asks if he or she is the driver, although its accuracy is not 100%. Of course, you can also simply turn the phone off. The problem is that users can opt-out or simply indicate they are not driving because they would rather use their smartphones to talk, text, watch Youtube or read their messages.

In a similar lawsuit, a family is suing the ride-share company Lyft when an Uber driver who had both Uber and Lyft driver apps on his smartphone decided to pick up a ride request from a Lyft rider while transporting an Uber passenger and made an unsafe turn that resulted in a tragic accident. The suit contends that Lyft could have prevented the Uber driver from using its app while the Uber app was operating.

The lawsuits assert that Apple and Lyft have a legal duty to provide safety measures that prevent users from using the phone or app while driving or from using certain apps. Even a warning to users, such as those on cigarette packages clearly advising the consumer that smoking will cause lung cancer and heart disease, is insufficient. Voice activation or hands-free use of a phone, although legal, is still a distraction since your brain is not totally focused on the act of driving.

So far, courts are unwilling to allow these lawsuits to go to juries. It may, however, be a matter of time before the courts will permit these suits to at least be heard by a jury. It took decades for tobacco suits to proceed and before juries began delivering huge awards against tobacco companies. The dangers of smoking are well-known as are those for texting and driving though people choose to do both.

At least the victims of distracted driving can bring a claim against the responsible driver who was texting or otherwise distracted while driving, although their insurance or resources are pale when compared to Apple’s.

Damages in a distracted driving accident typically include:

Neil Burns is a Boston distracted driving lawyer who has obtained millions of dollars for his injured clients over his 30-years of practice. His experience, knowledge and skills obtained in handling thousands of cases can get you the compensation your case deserves.