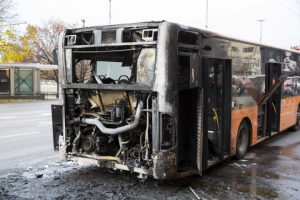 As a mode of transportation, buses are generally safer than riding in a passenger vehicle. They are larger and heavier and can withstand more force than an ordinary automobile. Passengers sit several feet above the road surface so they seldom are exposed to blunt force trauma from another vehicle. Still, bus passengers suffer serious and sometimes fatal injuries. In one tragic case in Southern California recently, a 16-year old was killed on a double-decker tour bus that led to a multi-million dollar verdict.

The facts of the accident are not in much dispute but there was plenty of finger-pointing by all parties. By all accounts, however, there was plenty of blame assigned to the tour bus company. The bus tour was organized by a fellow teen’s parents to celebrate her birthday. Her family hired a double decker tour bus that had an open roof on the top level where all 35 teens gathered. The adults, including a tour guide and the birthday girl’s parents, remained below while the bus was driven on the Hollywood freeways. According to court records, the girl’s family supplied alcohol to the teens, all under age, and had loud music blaring during the fatal ride.. The teens were reportedly standing and dancing to the music, despite their being seatbelts. The teen who was killed stood on a riser above a certain safety level and as the bus went under an underpass, he struck the back of his head, causing a severe brain injury. He died two days later.

There was testimony that the teen had consumed alcohol before boarding the bus and may have consumed more while on board though the bus company disputed this. Toxicology reports showed his blood alcohol to be over the legal limit of 0.08%. Also, there was testimony that the birthday girl’s mother gave several flasks containing vodka to her daughter before the trip and told her to distribute them to the teen guests.

The family’s bus injury lawyer argued that the tour bus company unlawfully allowed the teens to have and consume alcohol and were negligent in failing to supervise the party. Adequate supervision by the bus driver and tour guide would not only have banned drinking but also should have had all passengers safely in seat belts and not dancing. Also, the bus driver or company might have been negligent for driving on a roadway with low underpasses of less than 2 feet clearance from the top of the bus while promoting a wild scene of loud music, dancing and out-of-control teenagers on the top deck.

The bus driver claimed this was his first time driving a double decker bus. The tour guide asserted he had received no safety training and was not even aware the bus had seat belts on the upper deck. The parents of the birthday teen were also sued for supplying alcohol to underage individuals and failing to supervise the party. Attorneys for the defendants claimed the teen who was killed was primarily responsible for his own death by getting intoxicated and not exercising reasonable care for his own safety.

The jury assigned 70% fault to the bus company and 25% to the parents of the birthday girl. The teen who died was deemed 5% comparatively negligent with this amount deducted from the $26 M award, leaving the family $24.7 M.

Lessons to be Learned

The tour bus company learned its lesson from this tragedy as it now assigns security guards on the top decks of its double decker buses and does not allow alcohol on board. Stickers are present warning passengers to remain seated and belted.

What may have swayed jurors to award one of the largest wrongful death verdicts in an accident of this kind was a previous injury that occurred a year earlier on the same tour company’s double decker bus when a standing passenger on the open top deck suffered a fractured eye socket when hit by a tree branch. The company failed to address any safety issues following that accident and changed none of its policies. As a common carrier, bus companies owe a high duty of care to its passengers.

What may seem like commonsense to most of us apparently was lost on the parents of the teen who sponsored the party and the bus company driver and tour guide, not to mention the lack of training or adherence to safety. Allowing underage drinking and ignoring foreseeable dangers in dancing on the top deck of a bus that passed under highway bridges or underpasses is inexcusable. The teenagers’ behavior, while not excused either, is understandable since no adult was willing to warn them of the obvious risks they were taking. Any parent knows that teenagers feel invulnerable in many instances and risk-taking can be a thrill ride.

Most buses do not have seat belts, though that thinking is beginning to change. Seat belts can be a hindrance and requiring them to be worn is hard to enforce. They also have little effect in most bus accidents since seats are high and padded, but if the bus rolls over or is involved in a violent collision, being restrained will save lives and prevent serious injuries. Although not practical on city buses, they can be on school buses and especially on open air double decker buses.

In Massachusetts, a wrongful death claim is brought by the administrator for the decedent’s estate. Only the immediate family members of the decedent can be compensated. Damages in such cases can include:

Although the jury may not have considered or awarded punitive damages against the defendant bus company or the parents, it is conceivable another jury may have done so in a similar case. In that case, the bus company’s failure to undertake safety measures following an almost identical incident a year earlier, not providing safety training to its employees and allowing underage teens to drink on its bus may rise to gross negligence or a willful indifference to the safety of others.

Over 700 million people ride buses of all types each year in the US. Buses have a strong safety record but statistics from the National Highway Traffic Safety Administration show there were 250 people killed in 2009 and 20,000 injured. These include people in other vehicles and pedestrians.

These cases often present difficult issues of liability and proof. Bus injury lawyer Neil Burns of Boston has handled numerous complex injury cases with considerable success over his 30 years of representing the interests of those injured in accidents throughout the Commonwealth. Contact him today for a free analysis of your injury claim.  Call Attorney Neil Burns today for a free case consultation: 617-227-7423.